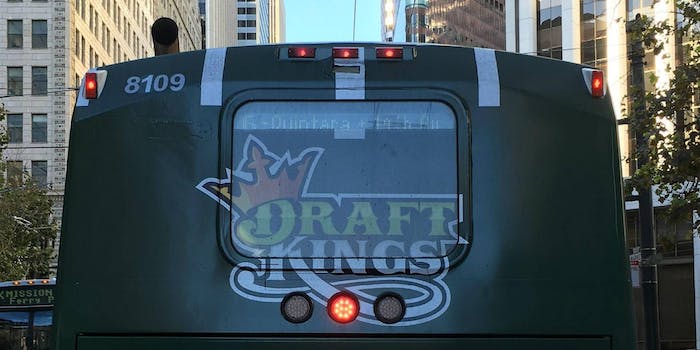 Could a FanDuel, DraftKings merger save the DFS industry?

A merger likely would face plenty of scrutiny from the U.S. government.

Entering the 2016 NFL season, daily fantasy sites (DFS) like DraftKings and FanDuel faced an uncertain future. Advertising was way down and skepticism about whether one or both sites would survive was rising.

One possible solution was a merger between the two and though both sites (and other sources) said such a union was unlikely—even though FanDuel and DraftKings had been in talks to do that very thing—the rumors have gotten more intense during the past week.

The Wall Street Journal reported that the two were “hammering out a merger deal” that would likely keep DraftKings CEO Jason Robins as the CEO of the new combined company and FanDuel CEO Nigel Eccles as the chairman.

“We’re not commenting on the rumors,” a FanDuel spokesperson told the Daily Dot on Friday. DraftKings did not return a Daily Dot message asking for comment.

The DFS industry looks much different now than it did at this time last year. A number of states have declared the sites illegal—though New York and Virginia have made them legal—and the advertising blitz that was omnipresent in 2015 is now only a whisper.

That apparently was part of the plan. “We always knew that this year’s ad pace would be lighter than the last,” DraftKings spokesperson Femi Wasserman told the Daily Dot in September. “That was our strategy even before the fall’s events.” But neither site is profitable yet, and legal fees continue to be a burden.

“There’s also cultural fatigue, the novelty wearing off, and backlash [due to] the idea that highly skilled players usually win,” Chris Grove, an analyst who follows the industry, told the Journal.

Plus, as one industry source recently told the Daily Dot, a merger seemed unlikely because of the company’s differing philosophies and because so many of the top-notch players use both sites at the same time.

There’s also the possibility of a potential merger resulting in an anti-trust lawsuit. As Forbes recently wrote, “With near certainty, any attempted merger between the daily fantasy sports industry’s dominant No. 1 and No. 2 players would suffer substantial regulatory challenges… While there is some flexibility regarding whether the two agencies choose to challenge any particular transaction, a merger of the No. 1 and No. 2 companies in any business category is at the highest risk of scrutiny– especially where these two companies combine to have an overwhelming share of the overall market.”

As Bloomberg notes, the two sites combine to control 90 percent of the DFS market.