The story behind the comic strip that has Facebook and copy editors rejoicing.

In the last eight days, over 28,000 people have shared a comic about a character who’s physically repulsed by bad grammar. He meets a companion whose grammar is so atrocious, it makes the first cough up pools of blood.

Grammerly, a product that autochecks grammar, shared the comic, though they didn’t draw it.

In a sense, neither did the comic’s author, because this is the result of a caption contest held by the four-man collective Cyanide and Happiness. In late January, they announced contest rules: take any old C&H comic, keep the art intact, and rewrite the dialogue. C&H fan “Jay A.” re-captioned a cartoon from 2009.

C&H haven’t formally announced winners from the contest, though they did post Jay A.’s entry on its site.

Per contest rules, users submitted their entries on C&H’s Facebook page, where Jay A. is a frequent commenter.

“I’m very eager,” he wrote about waiting to hear back on contest results. “[B]ut I’d feel rude if I emailed them lol. I think we just wait.” 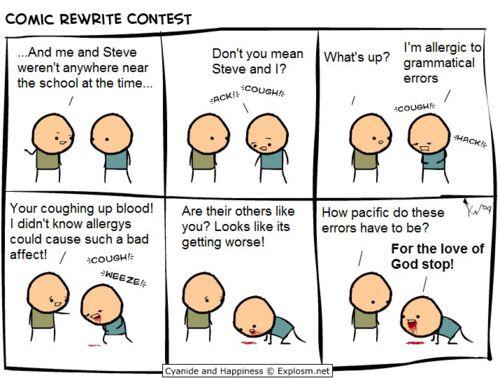