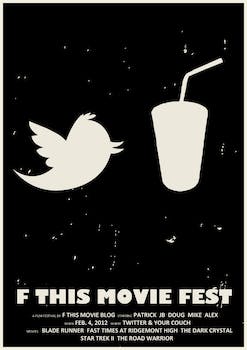 Watch the F This Movie Fest from home

For those people unable to fly out to France for the Cannes Film Festival, the F This Movie Fest on Saturday offers an affordable alternative. All you need is a Twitter account and a Netflix subscription.

Starting at noon Central Standard Time, the Chicago-based F This Movie blog is hosting an interactive movie marathon. Patrons are being asked to watch Fast Times at Ridgemont High and tweet about it using the #fthismoviefest hashtag.

Other films in the 1982-themed “festival” include The Dark Crystal and The Road Warrior. Blade Runner was on the list but has been taken off of Netflix’s instant watch.

Following the festival, F This Movie will record its 100th podcast,  highlighting some of the best tweets and announcing the winner of the blog’s DVD giveaway.