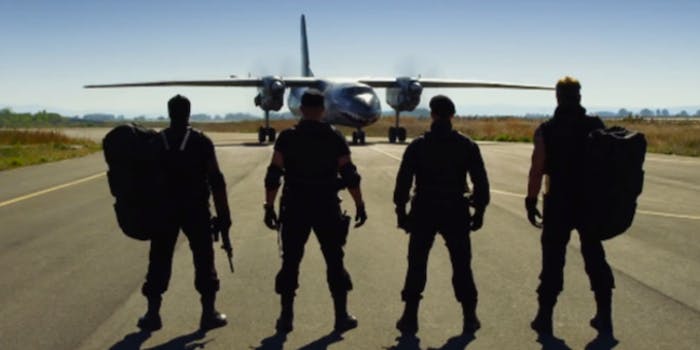 You're nobody till somebody leaks you.

The Expendables 3 isn’t out until August 15, but don’t tell the hundreds of thousands of people who downloaded a leaked copy this week.

The popular action-movie franchise was likely looking at big opening weekend —The Expendables 2 grossed more than $300 million—but the leak has thrown a monkey wrench into the theatrical release. Pirated copies of the movie, likely from a DVD screener copy, appeared on file-sharing sites on Wednesday, and by Thursday night, the leaked rip had been downloaded more than 100,000 times. According to TorrentFreak, at one point, more than 65,000 were involved in downloads on a single torrent.

TorrentFreak also points to a popular entity called Drarbg as the possible source of the leak, which is likely a group of people and not an individual.

Distributor Lionsgate has not offered comment on the leak, but in 2011, Nu Image, the franchise’s production company, sued 23,322 users who downloaded the original Expendables in a similar leak. They eventually dropped the suit, but it will be interesting to see how they approach this leak. Chasing down IP addresses and slapping them with lawsuits isn’t always easy. Perhaps Nu Image can send a few of the Expendables in to wring out some justice/make something explode?