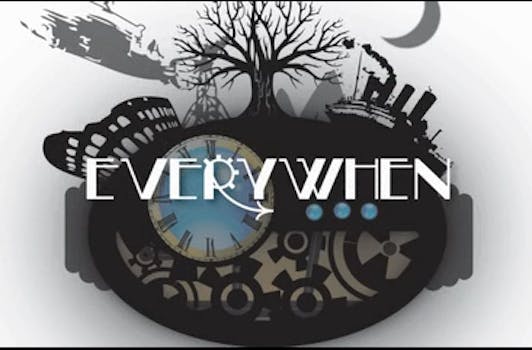 James Fenczik's pilot about two 20-something deadbeat time travelers has gone big on Reddit. Now all he needs is $100,000.

The cast of characters includes a pair of 20-something deadbeats, a mad genius inventor grandpa, and George Washington, who battles an army of zombies spawned by his mutant cherry tree. Subsequent episodes chronicle the pair’s further wild—and thoroughly unhistoric—adventures through history. People have compared it to Doctor Who.

The show, called EveryWhen, doesn’t exist yet. Fenczik is taking a two-pronged promotional attack to that may become more and more common for cash-strapped indie writers and artists: He’s opened a Kickstarter and launched it with a Reddit AMA (“ask me anything”). Now all he needs is $100,000.

Fenczik apparently has connections in the industry who are donating props and other expensive items to keep production costs low. His concept art is top notch, and the promotional video for the piece (below) is great, if a little short on special effects (hey, if they had money, they wouldn’t be launching a Kickstarter).

The reaction on Reddit has been tremendous (“I would watch the shit out of this,” one redditor wrote). Fenczik’s post has shot to the top of Reddit’s 1.5 million strong r/IAmA section. That ought to be a good sign. Success on r/IAmA helped Louis CK make $1 million in about two weeks. Others have raised tens of thousands for charity or political causes.

And last week, Iraq veteran Konrad Roland Kjos Ludwig gathered nearly $40,000 in donations for his nonfiction book project about the Siege of Sadr City. He also had a front page r/IAmA post.

So far, however, the project has only managed to raise a paltry 800 bucks or so. That’s less than a dollar for each person who hit the upvote button.

What’s with the disconnect between redditors’ enthusiasm and their checkbooks? We’re not entirely sure. Maybe it’s the fact that the mechanics of taking a television pilot from point A to point B just doesn’t connect on a visceral, emotional level.

Maybe Fenczik should ask Neil Gaiman for a retweet.