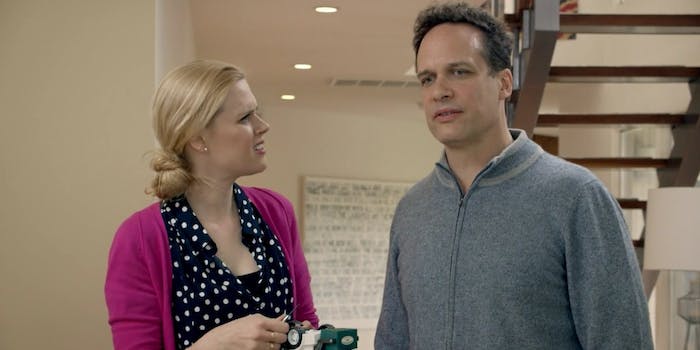 Sometimes you just have to do it yourself.

With the development process for television shows resembling the Donner Party—the corpses of fine ideas strewn along the trail while others remain living, cannabilized—there is inevitably a quiet desperation concerning all that wasted effort.

“It’s a gut-wrenching process, investing time and your soul writing TV pilots with characters and relationships and stories that you have wanted to tell all your life, only to see those scripts and those characters die months later,” comedy writer Christy Stratton told the Daily Dot via email. “And then you have to move on to telling another story from deep down in your soul that will also die. The best thing about the webseries medium is it lives!”

And that’s how the story that Stratton most wanted to tell ended up as Everyone’s Crazy But Us—a webseries starring Janet Varney and Diedrich Bader, and featuring guest appearances by talent like Keegan-Michael Key, Grey’s Anatomy’s Kate Walsh and Guy Branum. While Stratton had previously written episodes of shows such as King of the Hill, Raising Hope, and MTV teen comedy Awkward, this time she’d find humor directly from her own relationship.

“I’ve wanted to do a married couple show, because, at the time I created it, there hadn’t really been one since Mad About You. My husband and I have very different backgrounds and we disagree about most things—even how much water one should use when scrubbing a baking sheet,” said Stratton. “But where we absolutely, unwaveringly come together is when it comes to other people and their craziness. That feeling of us against the world.”

And that’s the defining sentiment that you get from the performances of Varney and Bader: Even though they may chafe at a cosmetic level, fused by marriage, they’ve become symbiotic in their need for security and reassurance; it’s everything else that’s a threat. It’s sort of touching until you start contemplating co-dependency issues or you’re reminded of how even thieves can band together for a selfish cause.

Everyone’s Crazy But Us: Meg with Kate Walsh, Janet Varney, and Diedrich Bader from Kate Walsh

But this is to overanalyze what is a comedy, and a smart one at that. Each episode crackles with enthusiastic vigor helped along by the terrific cast. And the way the two leads use each other to avoid confronting the nauseating characters that enter their lives—the strategic teetotalers, the self-diagnosed allergy sufferers—while also finding fault with those that must think the same of them is prime comedic fodder. It’s not that the couple think they’re perfect, or even normal; it’s just that to them no one else seems even to be trying.

That it is so enjoyable is actually a bit surprising. It perhaps wasn’t a bad thing that Mad About You didn’t inspire a legion of imitators because marriage (and the later seasons of pregnancy and babies) can make for some of the most hackneyed comedy. Odd cravings, being kept up all night, kids saying crazy stuff, and a treacly through-line of smug, mutual love may amuse the apparatchiks of Mumsnet, but to everyone else it just seems like a boring function of life that we’re not looking forward to or would prefer to forget.

Yet Everyone’s Crazy But Us is fun and nuanced in its depiction of its central relationship so it avoids the pitfalls of cliché and shows that there can actually be something to the genre. Perhaps it has something to do with who writes them. For Stratton it’s only something she has been able to achieve having actually lived through it: “I couldn’t write well about having a kid ten years ago, but now I can write about that, about teen angst, and everything in between. Seriously, I can remember my numerous failed cheerleading tryouts like they were yesterday because I am sixteen years old forever and ever,” she recalled. “Alexis Wilson beat me out for that one last slot junior year, and although she is a dear friend now, I will NEVER FORGIVE HER.”