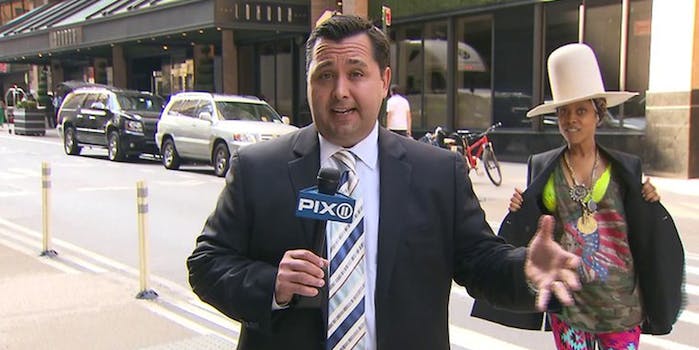 Erykah Badu tries to kiss a reporter during a live broadcast

Badu and her hat apologize.

Singer Erykah Badu has been in New York City over the weekend, performing with Dave Chappelle and hanging out with Spike Lee. On Friday, she indulged in a bit of sightseeing. Or rather, she trolled Pix 11’s Mario Diaz, who happened to be reporting on Shia LaBeouf’s dramatic arrest.

Diaz was reporting live on Friday afternoon, when Badu entered the shot and started mugging for the camera in her giant hat. When she attempts to kiss Diaz, he gives her the “NYC push back,” but he keeps his professional composure.

Apparently, things are all good between them.

@fatbellybella I get it because… “Ain’t no particular sign I’m more compatible with I just want your extra time and your….. kiss”

@fatbellybella #Btw my wife and 2-year-old were 20 yards away when it happened… She saw the roll up, you putting on hat & everything.