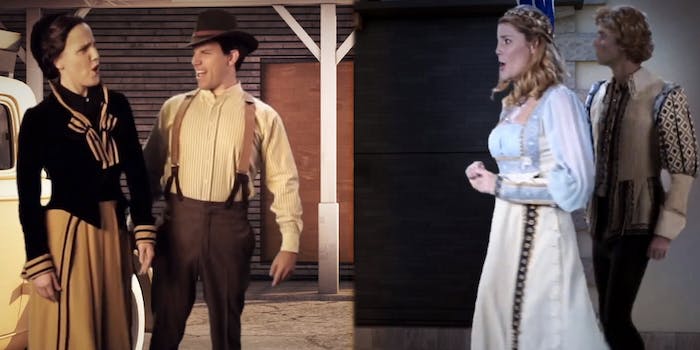 It's Bonnie vs. Juliet in a battle for the best tragic love story.

YouTube sweethearts Hannah Hart and Grace Helbig showed off their combative side this week with an appearance in Epic Rap Battles of History as leading ladies in two historical power couples.

Hart plays Bonnie to epicLLOYD’s Clyde, while Helbig goes Shakespearean as Juliet. The double lovers quarrel features some mean one-liners, including Bonnie rapping, “How can you beat my man at some mano a mano / you can’t protect your best friend from some John Leguizamo,” a great lyrical callback to Baz Luhrmann’s film version of Romeo and Juliet.

We don’t want to spoil the outcome, but if you’re familiar with the endings of both stories, you can probably guess how it goes. Let’s just say it’s hard to call a winner on this one.