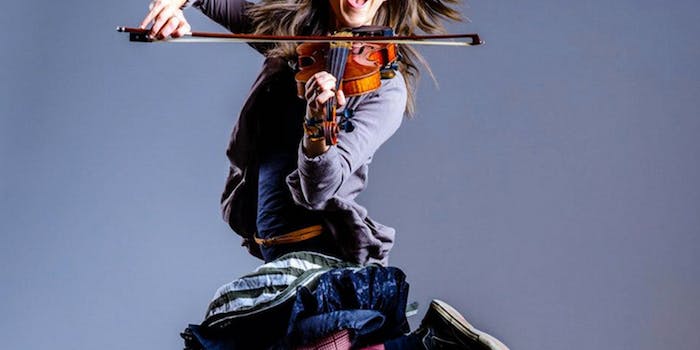 Lindsey Stirling has hardly been home long enough to unpack her bags, and she’s already exhausted.

The Utah-based violinist filmed a music video the night before we spoke and “will be at it again all throughout tonight.” She filmed another one the day before that, “and that was the day before I got home from tour.”

“I’ve been filming nonstop,” the diminutive Stirling proclaimed. “These were songs songs that I wrote while on tour, too.”

She said she wrote one song on the back of the bus during her spare time. With another, she’s been trying to coordinate a video shoot.

“I had to get a separate director and producer for that one,” she said. “Had to coordinate with a makeup artist and costume designer.

“I’ve been doing all of this from a bus—emails and drawing pictures. And them I’m going to be editing it as soon as that’s all done.

“It’s funny. People have been saying that I must be so relaxed to be off tour. I’m like, ‘Are you kidding me? I can’t wait to get back on that tour bus. I just want to curl up on that bus again.”

Now 26, Lindsey Stirling is perhaps YouTube’s most accomplished musician. She’s been a temporary network TV darling on America’s Got Talent, used her denotation as the “hip-hop violinist” to help bridge the gap between classical and pop music, and attracted nearly one million subscribers to her channel, LindseyStomp.

But until recently, Stirling was largely unknown to the concert-going community. For much of her public life—since being told by America’s Got Talent judge Piers Morgan that she sounded like “a bunch of rats being strangled” in 2010—her most public presence has been on YouTube.

“That was my way of getting my material out there,” she said. “That was what I was always passionate about, and that was what I enjoyed creating the most. One by one, I built myself up. Eventually, I had a huge audience.”

That fame comes with good reason. Since first linking up with superstar YouTube filmmaker Devin Graham in May 2011 and filming “Epic Violin Girl,” an expansive, multi-scened showcase that stretches 2:40 and racked up more than four million views, Stirling has built her online brand by regularly releasing enchanting narratives played out to the tunes on her violin.

“The ideas feed off each other,” she said. “Sometimes the visual idea works first, other times the audio comes first. Sometimes I’ll think of an idea. Sometimes we’ll sit down and talk about ideas.

“For certain videos, like ‘Shadows,’ I drew up the image of what I wanted and [Graham] set up all the lights. He was the hands that understood a little better how to make it all work. ‘Phantom of the Opera’ I completely directed and did everything by myself, but ‘Elements’ is a complete collaboration.”

That’s something that Stirling attributes just as much to her keen sense of cinematography as she does her musical prowess. Her most recent video, last week’s “Moon Trance,” with its choreographed zombies and midnight lighting, looks like a rehash of Michael Jackson’s “Thriller.”

“I feel like I totally have my dream job. I went to film school for two years, but I’ve always enjoyed creating music. Now when I’m creating music in the studio, not only am I thinking about the sounds, but I’m getting all these visual ideas. and I think that enhances the music.”

Stirling’s channel remains a beacon of strength for the violinist, but she can’t help but divert her attention towards other ventures. She told the Daily Dot she’s “working to expand me upward from the Internet audience,” putting a newfound focus on touring, and doing what she can to promote her debut album, Lindsey Stomp, which she released in September.

“Right now, all the people who show up at my shows learned about me through the Internet,” she said. “That’s how they know me. It will be interesting once we get more exposure in other mediums, like TV spots.

“One thing that’s awesome is that venue owners love my concerts. They like that the audiences aren’t your typical concert crowds. They’re not music buffs. They’re an Internet crowd.”