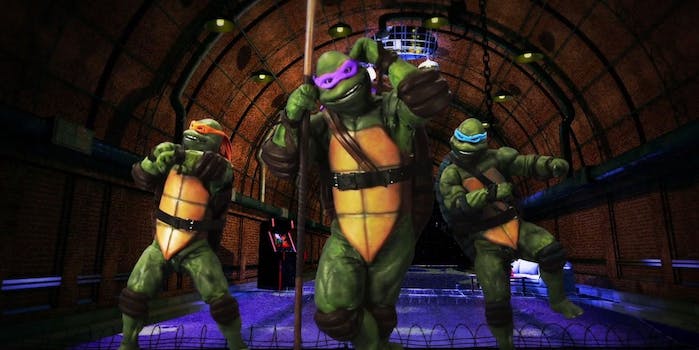 The heroes in a halfshell take on the fathers of the Renaissance with their most effective tool -- rap.

Epic Rap Battles of History finished off its third season this week with a four-on-four rap battle for the ages. It’s Donatello, Raphael, Michaelangelo, and Leonardo versus … Donatello, Raphael, Michaelangelo, and Leonardo. That’s right, the fathers of the Rennaisance take on the Teenage Mutant Ninja Turtles who inadvertently taught 90s kids about the historical era while also selling promotional toys and fighting ninjas.

The series is a powerhouse, amassing over 10 million subscribers since its inception in 2010. The brainchild of creators Nice Peter and epicLLOYD, it has featured showdowns such as Mozart vs Skrillex and Adolf Hitler vs Darth Vader in the past. In the finale, they invite the duos of Rhett and Link and SMOSH to portray the artists, who go up against the series creators as the turtles. Perhaps the sickest burn is TMNT‘s Donatello questioning just who in the world his namesake even is:

“Dona-tella who you are again dude? / Because I don’t have a clue what you do.”

Who won? The originals or their mutant sucessors? All we know is this battle is well-timed for the release of the new Teenage Mutant Ninja Turtles film, which has been making waves on social media by releasing new character posters as voted on by fans in the lead up to the film’s release on August 8th.  Do we smell a brand partnership? Or just accidental synergy for Epic Rap Battles of History and the upcoming movie?