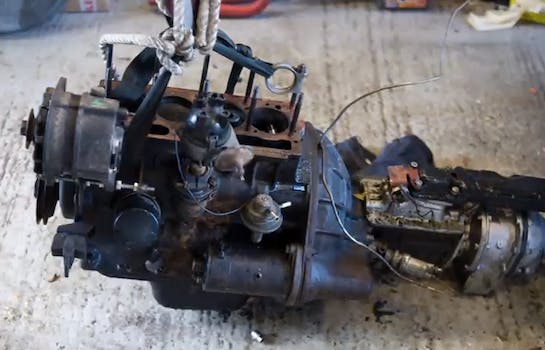 Chris Hedges told the Daily Dot that 11 months and 3,000 picture went into to rebuilding his 1965 Triumph Spitfire.

An amateur mechanic struck YouTube gold when he realized that the thousands of photos he’d taken of an engine could translate into an epic stop-motion animation.

Chris Hedges, a 28-year-old from the U.K., had bought a crusty old engine for his 1965 Triumph Spitfire through eBay. “I’ve had it for nine years and love working on it,” he told the Daily Dot in an email.

Since he’d already photographed every step of the process for reference, Hedges boiled down eleven months of hard work (“and a lot of coffee,” he noted) to one quick video. In under two-and-a-half minutes, Hedges strips down, cleans, and reassembles every piece of the engine into working condition.

“I thought it’d be quite cool to turn it into an animation—I learnt a bit of video editing in college,” he noted.

The video ends with a cliffhanger: Hedges drives off but leaves a few spares parts laying on the ground.

Though the video shows the car driving away, Hedges has his fingers crossed that his work will hold.

“It’s going to get its first long distance trip this august down to the Loire Valley in France,” he said. “Here’s hoping that engine will make it!”