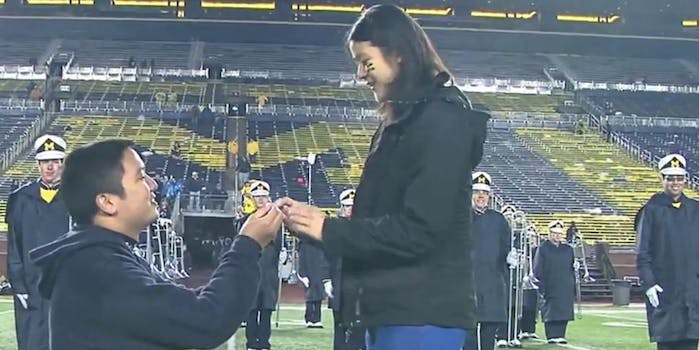 Eat your heart out, James Cameron.

Getting the University of Michigan marching band to help you propose to your girlfriend is memorable, but recording the entire scene and editing it to look like a bad Michael Bay movie is unforgettable.

That’s exactly what happened when Michigan Marching Band member Jonathan recruited his friend Scott to create a Hollywood highlight reel of his proposal to his girlfriend Danielle a year ago. Needless to say, the new edit includes many, many more explosions than the actual event.

“The funniest man for me is his own editing pretending the whole thing was a military operation with the bombs setting off and all, with soldiers saluting him and diluting the whole thing with a football play,” redditor cleanbill commented. “Like ‘good job soldier! your country thanks you for marrying this woman.’”