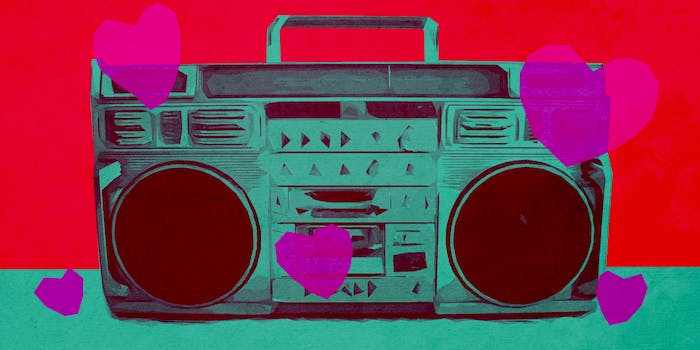 In which I blame emo for all my failed relationships

What liking sad music says about us.

I stood in the grain aisle at Safeway holding a basket overflowing with kale, humming along to the All-American Rejects’s “Dirty Little Secret,” when it hit me: I was the girl in this relationship once. As music from the mid-aughts streamed through the overhead speakers, I began to think that the music from my adolescence inadvertently set expectations for future relationships.

Through songs describing needy women and damaged men—dudes who appeared to be wrapped in mystery, but just sang anthems of emotional unavailability—I created assumptions about what relationships were like in high school. That library of mixtapes and stereotypes stored inside my brain didn’t collect much dust as I grew up, instead it provided the soundtrack to my dating life in all its new found glory.

This epiphany brought comfort lost to endless swiping on Tinder and dates that ended as sour as the beer in a dive bar, and I embraced the ability to blame all my dating failures on emo hits and the nostalgia-inducing genre I still love to scream. At least for the purposes of coming up with an excuse as to why my dating life could be summed up in a trailer akin to the Used’s music videos.

Reminiscing on the conscious uncouplings and dating experiences I’ve gone through since the days I blasted EDGE 103.9 while caking my face with drugstore foundation and too much eyeliner, I decided to go through the list of my favorite hits to see if I wound up with people who fit the lyrics.

The one with the ex

Swing, swing from the tangles of
My heart is crushed by a former love
Can you help me find a way
To carry on again

Broken hearts take time to heal, and giving someone the responsibility of fixing one that is not theirs, and building up the belief that maybe one day the pieces will be put back together so successfully they can be given to her, is a recipe for complete disaster. But obviously as a teenager I thought the sentiment was sweet.

The one you know is wrong

All I can say
I shouldn’t say
Can we take a ride?
Get out of this place
While we still have time

It’s easy to disappear into something and someone you know is bad for you, but you do it anyway because for a moment, it’s possible that it might be the right thing after all.

Jimmy Eat World is one of my favorite emo megastars, as the band is from the hometown I always wanted to escape. As frontman Jim Adkins told MTV: “‘Work’ is about doing something you know you shouldn’t be doing… It’s about walking into an unhealthy situation, on purpose. Which could mean it’s about an interoffice romance.”

I knew it was a bad idea.

The one who is not OK

But you really need to listen to me
Because I’m telling you the truth
I mean this, I’m OK!
(Trust Me)

When the outward assurances of satisfaction obfuscate the inner truths that perhaps all is not OK, a relationship that values open communication inevitably suffers. It’s not to say My Chemical Romance advocated for being closed off and dishonest with the person you’re in love with, but the “I’m OK” lie became the anthem we sang to ourselves when we didn’t want to burden each other with actual feelings. Because what are those, right?

The one who holds on too tight

Nothing says “I love you,” like controlling behavior that ensures someone can’t get out of an unhealthy relationship.

The one you keep revisiting

One night and one more time
Thanks for the memories
Even though they weren’t so great
“He tastes like you only sweeter.”

Sometimes you keep going back to an old flame long after it burned out, a physical or emotional connection that exists despite you logically knowing it should not. It smolders for as long as you still feed your desire, until the relationship finally does become just a memory.

The one who is you

I’ll show you mine if you show me yours first
Let’s compare scars, I’ll tell you whose is worse
Let’s unwrite these pages and replace them with our own words

You know I couldn’t finish this playlist without getting hella emo.

As much as I’d like to blame loud and sad emo for all relationship failures, I can’t. It’s impossible to associate the music I listened to as an adolescent and the impact it might have had on my brain and behavior as an adult.

“It’s challenging to study correlations between music listening of specific artists and concurrent actions and behaviors because of the subjective (and cultural) status of music preference and the ecological differences in every person’s listening experience,” Alex de Raadt of the Sync Project, an organization that researches ways music can affect health, tells the Daily Dot via email.

en to, and what the music you listen to says, scientifically, about you. As the Snyc Project wrote:

[I]ndividuals who prefer music with complex structures, such as this, typically have an active imagination and do not identify with conservative ideology. People who enjoy listening to upbeat and non-complex music, such as this, are typically helpful towards others, cheerful and conventional. Those who enjoy intense music like this typically take risks, and consider themselves intelligent.

So what does listening to emo say about me? According to the study, people who listen to “intense and rebellious music: alternative, rock, heavy metal” are “open, dominant, considers oneself intelligent, extraverted.” This seems a bit more scientifically accurate than blaming Tom DeLonge for bad dates.

Another study shows that sad music (not any specific genre) is associated with certain personality traits, and investigates how listening to songs with sad lyrics can affect our emotional experiences. Researchers found that people who enjoy sad music experience feelings of nostalgia and wonder, and that those people also exhibited personality traits like “Openness to Experience” and “Empathy.”

Listening to my old emo favorites evokes a whole range of emotions and memories—from the confusion and frustration about growing up and leaving home, to driving too fast on the freeway with all my windows down and the music up too loud. Just as the artists poured their hearts and souls into the songs they wrote for fans, I put a bit of myself in the songs, too.

It’s easy to associate relationships with song lyrics because I want to know that other people experience similar heartbreak, hilarity, discombobulation, and the struggle of being someone who lets another person down. Maybe so many of us recognize ourselves and relationships within these songs because they’re the honest, raw visualization of the human experience that everyone—from teens with bad haircuts to millennial writers—can relate to.