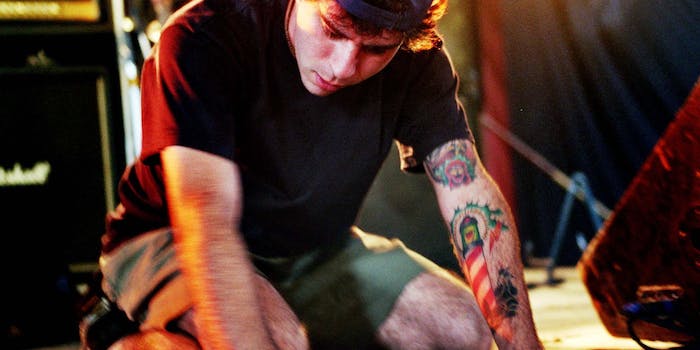 A distinct and serious problem.

Like disco before it, emo music and its fans spend much of their time in the spotlight being mocked and ridiculed. The music is whiny and dramatic, critics say, and so-called “emo kids” are self-centered and desperate for attention. But much of the impetus behind emo hate mirrors the stigma associated with mental illness—a distinct and serious problem among teenagers.

As much as any genre is representative of its audience, the themes of emo music appear to speak not just to teen angst but also the most serious signs of depression. When emo is made a target of ridicule, kids who turn to the music while struggling against a mental illness are likewise pushed further from the care they require.

For someone who didn’t grow up in the aughts, it can difficult to realize how much hate was directed at emo as a music genre and as a subculture. Throughout the past decade, emo became the focus of a social prejudice that often enough exploded into downright rage and actual discrimination. Newsreels in Mexico showed hordes of teenagers hunting and attacking “emos” while lawmakers in Russia attempted to ban emo fashion for supposedly promoting an unhealthy lifestyle.

The justifications from emo haters remain in decade-old forum posts describing the typical fan as “a middle class white kid with probably no other troubles in life other than the fact the mommy and daddy don’t pay enough attention to” or, more abstractly, “the screaming apathy of a youth culture without any dedication except to their own self-loathing.” So-called “emos” or “emo kids” to this day are mocked for wearing makeup or odd clothing and, most pointedly, for cutting themselves.

Self-injury is a very serious symptom of depression and is frighteningly common among teenagers. Estimates range between 15 percent and one half of American teenagers have engaged in self-injury at some point and it’s considered a symptom of depression, bipolar disorder, borderline personality disorder, eating disorders, and addictive disorders. A 2012 paper published in the Journal of Adolescent Health found those engaging in self-harm were at an increased risk of suicide.

Despite the seriousness of the matter, self-harm is regularly a topic of ridicule through casual stigmatizing and mockery. “Emo kids” are seen as cutting for attention or for lacking an appropriate amount of life suffering to justify their cutting. Cutting is often qualified as not really a problem since, if they were “authentically” that pained, they would make a more serious attempt at suicide. Trolls post instructional images to “help” self-harming individuals cut themselves and lead campaigns to urge more people to do so.

Cutting and emo are inextricably linked, partially through themes of its most popular bands. Songs like “Bad Habit” by the Dresden Dolls and “All That I’ve Got” by the Used discuss the realities of self-harm past the point of metaphor,  and the My Chemical Romance song “Cemetery Drive” even makes the self-aware allusion: “Singing songs that make you slit your wrists/It isn’t that much fun, staring down a loaded gun.” While far more mainstream artists also reference self-injury—Eminem, Sia, and the Killers just to name a few—emo and “cutters” are inseparable in the public imagination

This connection hit a peak when, in 2008, a coroner and the parents of a British teenager who took her own life attempted to blame emo for her death. The coroner’s inquest called the overtones of her music “disturbing” and her parents said she frequently wrote about cutting or hanging herself online. British tabloids wrote fear-mongering headlines about an “emo suicide cult” responsible for the young girl’s death. In protest, British emos picketed the offices of the Daily Mail, and My Chemical Romance—the girl’s favorite band—even issued an official statement mourning the girl and clarifying that “our lyrics are about finding the strength to keep living through pain and hard times.”

The moral panic over emo reflects a deep misunderstanding about the role of mental illness. The connection between emo music and self-injuring or suicide isn’t complete bunk, but emo is far from the cause.

A 2008 analysis by researchers in the journal Australas Psychiatry rejected the notion “that music is a causal factor” of mental illness. In fact, music is far more likely a solace for depressed teens. A 2011 study published in the Archive of Pediatrics and Adolescent Medicine attempted to surmise which media kids diagnosed with depression consume most. While expecting high TV use to correlate, the researchers found music as the most likely media to be consumed by depressed kids.

Just as violent video games don’t make kids into killers, depressing music doesn’t lead them down the road of self-injury or suicide. But this false association that many continue to make between emo and cutting means the stigma of one is pushed alongside the stigma of another. How the public feels and discusses emo—even as it fades into the cultural rearview mirror—is a direct reflection of the avoidable hardships faced by those suffering from mental illness, making it all the more difficult for those patients to reach out for help.

This is especially true of teens, who might take steps to hide or disguise their symptoms. According to the National Alliance on Mental Illness, only half of those ages 8-14 with a mental illness are actively in treatment. Misconceptions about mental health can keep kids from reaching out—24 percent of teenagers said they think someone with a mental illness is dangerous and less than half think treatment can help, according to a 2006 HealthyStyles survey.

A large part of that stigma for teens clearly stems from the emo stereotype—that those struggling with depression, self-injury, or suicidalization are self-indulgent narcissists begging for people to pity them. In fact, most people struggling with these things do take great steps to hide them even from the people they trust, contradicting the very notion used to decry emo as a genre and subgroup.

Emo hate would just be silly—as ridiculous as generalizing the fanbase of any one music genre. But the forced yet close associations commonly made between emo and mental illness means it’s impossible to push one around without hurting the other. The reasons for that hate reflect the deep misinformation about the realities of living with a mental illness.