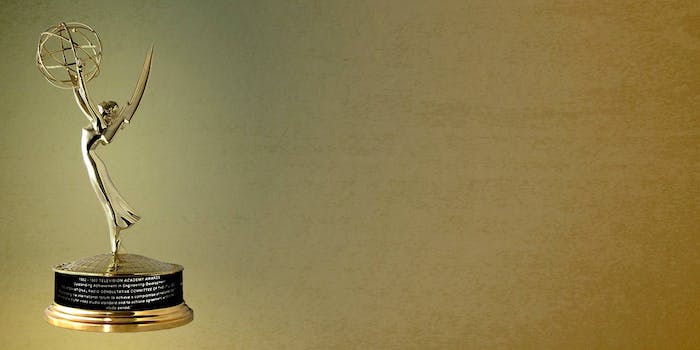 Epic Rap Battles of History, Honest Trailers, Gay of Thrones, Making a Scene with James Franco, and Park Bench with Steve Buscemi were all nominated in the “short form variety series” category. Other short-form categories, like outstanding comedy or drama series, were dominated by productions supported by major media properties, like Comedy Central, AMC, and Lifetime. However, Her Story, a webseries about two trans women in Los Angeles, broke the mold with a nomination.

For the actor and actress short-form categories, web outlets like FunnyOrDie and Maker Studios saw nominations, as well as projects like Acting Dead, a comedy about “Hollywood zombies.”

Over in the long-form categories, streaming content was well represented. Netflix series appeared in several categories, including lead actor and actress in a drama series for House of Cards stars Kevin Spacey and Robin Wright. Bloodline‘s Kyle Chandler also picked up a nomination in the lead actor category. In the comedy categories, Aziz Ansari nabbed a lead actor in a comedy nomination for Master of None against fellow streaming contender Jeffery Tambour of Amazon’s Transparent. Netflix’s Ellie Kemper and Lily Tomlin both received nominations for their work on Unbreakable Kimmy Schmidt and Grace and Frankie, respectively.

A full list of 2016 Emmy nominations can be found on Emmys.com.