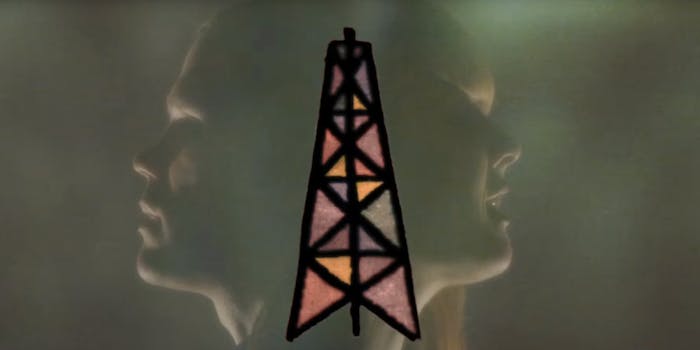 In the digital world, mashups can take many forms, from putting together disparate songs to combining unexpected visuals, or even the coming together of two totally different creative forces. Brooklyn musicians Emmy Wildwood and Nik Lokensgaard took all that into account with their newest YouTube collaboration.

Lokensgaard and Wildwood decided to work on the mashup after Lokensgaard produced “Scream” for Wildwood, a track that was featured in promotional videos for Fox’s series Scream Queens this fall. Wildwood said the decision to mash up Sia’s “Breath Me” and Major Lazer/Mø’s “Lean On,” “came together pretty quickly.”

“I’ve been a huge fan of Sia’s songwriting since ‘Breathe Me,’ and we both really loved the Major Lazer/Mø song ‘Lean On’ that happened to be in heavy rotation at the time,” she told the Daily Dot. “We noticed that the themes in the lyrics to both songs worked together really well and could even build on each other. Musically, the two songs are very different styles which made it fun to come up with an arrangement that was something new but also felt like something that could have been used in either of the original songs.”

To complete the mashup video, Wildwood and Lokensgaard turned to Brooklyn artist SS Powell to provide the visuals for their collaboration.

“His visual style and dark humor seemed a perfect fit for what we were trying to accomplish,” explained Wildwood. “We discussed trying to use his work for the single cover image and were very excited when he agreed to collaborate with us. As we developed a concept for the video, we all decided it would be really fun to incorporate the artwork into it. Nik is also a video editor and was able to integrate live video with the animated artwork in a way that finally brought the whole idea together visually.”

Now Wildwood is looking forward to releasing her first full-length record this spring, while Lokensgaard’s band Bredahl releases a string of singles over the next few months.

“This is just the beginning of a very fruitful year for both of us,” said Wildwood.