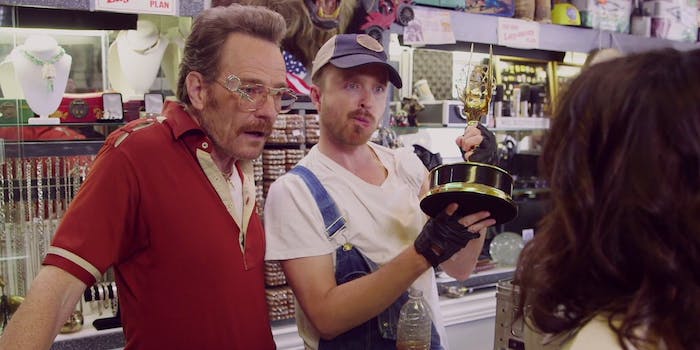 We’ve got more Saul Goodman to look forward to, but think of what the Breaking Bad sequel could’ve been.

Actually getting Walter White and Jesse Pinkman back together would be damn near impossible, even without all of the emotional damage and abuse between the two (almost all of it Jesse’s; let’s be real here). But picture this: Walt fakes his own death, gets Jesse to pick them up, and they start a new life in plain sight: the hosts of a pawn shop reality show with an illegal business on the side.

In walks Julia Louis-Dreyfus looking to pawn off one of her four Emmys after accidentally buying her own island, and it manages to take jabs at cable pay, reality shows, and the comedy categories. It’s a mini Seinfeld reunion, and we’re all the better for it, at least until we remember that Breaking Bad isn’t coming back.

It’s gold, Emmy gold! And Bryan Cranston didn’t even have to convert to anything just to hear Aaron Paul say “bitch” one more time.