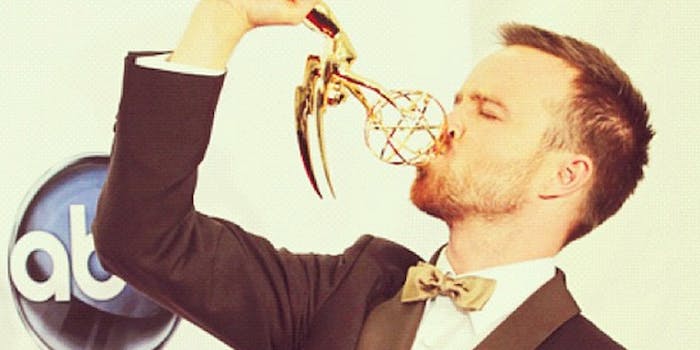 7 entertaining GIFs from the Emmys

In Buzzed, we take a look at things that trended over the weekend while you were away from your keyboard getting buzzed.

In this glittery, gown-draped edition of Buzzed, we’re counting down the seven most GIF-worthy moments from the 2012 Primetime Emmy Awards.

On Sunday night’s program, new shows shared the coveted golden awards with some old favorites. Showtime’s Homeland raked in four awards, including Best Drama. ABC’s Modern Family predictably won Best Comedy for the third time, but most puzzling, Jon Cryer won for his role on Two and a Half Men.

While the three hour telecast was mostly yawn-inducing and featured few surprises, the Jimmy Kimmel-hosted award show did feature some moments worthy of being turned into GIFs.

Catch up with other GIF-worthy moments on our Tumblr.

The Girls creator expresses how we would’ve liked to watch the Emmys.

The AMC drama was reimagined as a bizarre version of The Andy Griffith Show.

His dumb stunt to liven up Twitter earned 25,000 tweets.

America’s fun aunt and uncle grace us with their presence.

The night show host tries (and fails) to keep Jon Stewart from claiming his prize.

The cast accepts the award for Best Comedy for the third time.