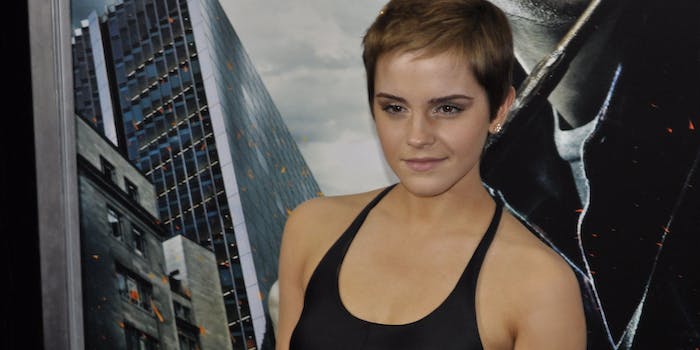 Put away your Princess Hermione poster.

You will probably not be shocked to hear that no, Emma Watson is not dating Prince Harry.

The Harry Potter actress was recently linked with the prince through the somewhat dubious source Woman’s Day Australia, an Australian news site. Certain corners of the Internet immediately exploded with excitement, because what could be more romantic than English rose Emma Watson being romanced by a real-life royal?

Never mind that the only evidence was an Australian gossip article about their “secret dates.” They’re both British, and apparently the image of Prince Harry as a ginger Ron Weasley substitute was too romantic to ignore.

Using a charmingly catty heart emoji, Watson subtweeted the rumor-mongers with this message:

WORLD ♥ Remember that little talk we had about not believing everything written in the media?!

And, OK, while she doesn’t specifically mention Prince Harry, we all know what she’s talking about. She followed that tweet with this:

also….. marrying a Prince not a prerequisite for being a Princess. https://t.co/vjodTAgEcC – Courtesy of Alfonso Cuaron.

Put away your Princess Hermione fanfic and your binder full of “Mr. Harry Watson” doodles. This ain’t happening.

Photo via Joella Marano/Wikimedia (CC BY 2.0)