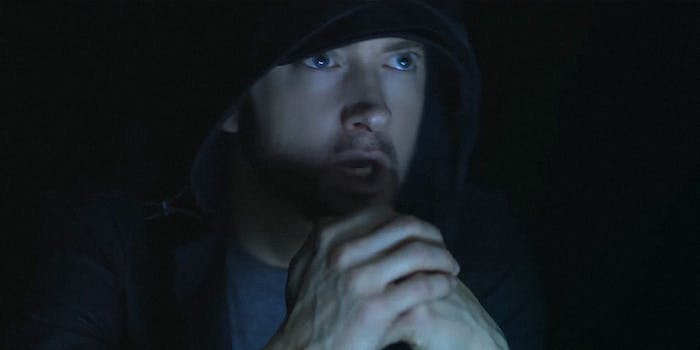 Everyone works out to Eminem’s ‘Till I Collapse,’ Spotify says

When it comes to the gym, we can't get enough. But why?

According to Spotify data released this year, the world’s workouts are powered by Eminem’s “Till I Collapse.” It’s been tops on the streaming giant’s workout playlists for years, according to Vulture, and the song has been listened to more than 400 million times on the platform.

It’s from 2002’s The Eminem Show and it wasn’t released as a single.

So why is the B-side such a gym fave? It’s memorable and about working hard—and it helps that Eminem remains the second-highest-selling male artist in U.S. history behind Garth Brooks. With that popularity comes the trickle-down economics of having the song show up in NBA player intros or pre-fight at the boxing ring. Michael Phelps has said that he added Eminem to his warm-up playlist prior to the Rio Olympics.

As Vulture notes, it’s “the perfect tempo for lifting (or, in some cases, running).”

On it, Eminem raps about self-actualizing, and Nate Dogg sings a throwaway chorus about finishing strong. It’s a less memorable version of “Lose Yourself,” though there’s a nifty moment here where Eminem says that Redman is one of the best rappers of all time, and hip-hop fans immediately realize how much of Eminem’s wordplay and style was influenced by the Newark rapper.

Vulture also points to some research that notes the science behind “Till I Collapse.” A Hartpury University study in 2015 found that Eminem’s music boosts athletic performance as much as 10 percent. Exercise science researcher Costas Karageorghis told Esquire that bass-driven hip-hop is ideal for psyching yourself up prior to weight training.

Which, you know, duh. But I think Eminem also takes us to a youthful and brash moment in time. Amid war and chaos, Eminem was the politically incorrect iconoclast who made America mosh at the turn of the century. The “We Will Rock You”-sampling brings the spine, but the rapper born Marshall Mathers is charged and fast on “Till I Collapse.” (As a bonus, this song features no homophobic slurs.)

It’s enough to get you jacked for shreddin’ time, or at least taking a lap around the building while you work from home.