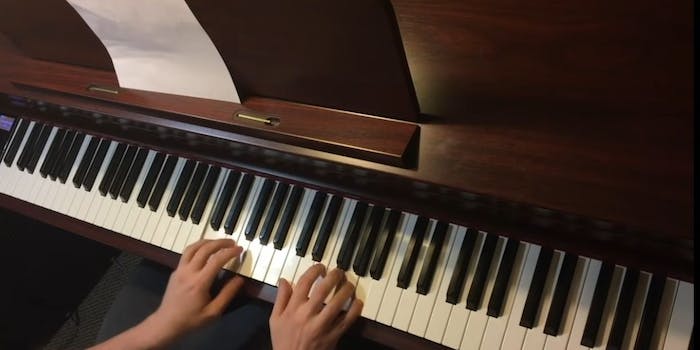 YouTuber Ryan692 is apparently a huge Eminem fan. In a recent YouTube video, he took his nearly 11,000 subscribers on quite a journey. He played an Eminem piano medley for more than six-and-a-half hours.

And it’s awfully easy to lose yourself in music that actually turns out to be beautiful when played in a classical music style.

Some of the music is haunting (the early few minutes of “Lose Yourself” could easily be found in a horror movie). Some of it is more upbeat than the subject matter suggests it should be (“Guilty Conscience,” for example). And some of it is hardly recognizable as hardcore rap.

As Ryan692 wrote in his video description, this was the biggest piano project he’d ever tried.

“This medley was obviously a LOT of work that took many months to learn, arrange, record, and edit but the end result was well worth it,” he wrote. “There are 100 songs here that span Eminem’s entire career. I tried to give more focus and time to each song which is another reason why this medley is so long. Every song is in its original key and I would say about 80 percent of this medley was learned by ear. There is no sheet music available for these arrangements unfortunately.”

Ryan692 acknowledged that he’d made some mistakes with his playing, but overall he was pleased with his effort.

“The sheer volume of this medley is a credit to Eminem and his discography so far,” he wrote. “It truly is amazing how many good songs he has produced, and this doesn’t even do the lyrics justice, which are on another level by themselves.”

Ryan692 uploaded the video in November, but it’s begun to go viral this week. And even though these Eminem songs probably weren’t meant to be heard this way, you’ll be glad you listened.