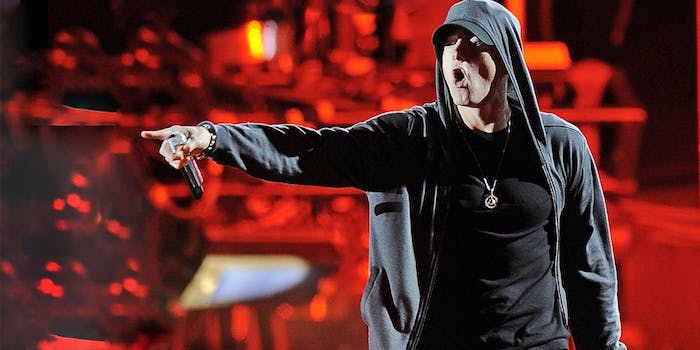 “I may fight for gay rights, especially if the dyke is more of a knockoff that Janay Rice/Play nice? Bitch I’ll punch Lana Del Rey right in the face twice,” the 42-year-old performer raps, “like Ray Rice in broad daylight in the plain sight of the elevator surveillance”—a reference to the American footballer recently caught on camera punching his partner in the face in an elevator.

The lyrics also touch on numerous other celebrities, including Anderson Cooper, Jay Z, and Kate Hudson.

Del Rey, real name Elizabeth Grant, has yet to comment on the new track. Singer Azealia Banks wasted no time making her feelings known, however, tweeting out that she will “personally punch [Eminem] in his mouth,” and that he should “go back to his trailer park and eat his microwave hotpocket dinner.”

@LanaDelRey tell him to go back to his trailer park and eat his microwave hotpocket dinner and suck on his sisters tiddies.

Banks is notorious for her online feuds, and as this incident threatens to escalate, other Twitter users are weighing in on the issue.

“eminem just lost me as a fan bc i cant believe he would say something so cruel about another artist” pic.twitter.com/4ZFbfbnUI6

The Guardian reports that Lana Del Rey is a self-confessed Eminem fan, telling an interviewer once that “he really changed my life. I didn’t know music could be intelligent. He wasn’t just rhyming for rhyme’s sake. That made me think I could actually talk about the way things actually were. He’s a genius.”