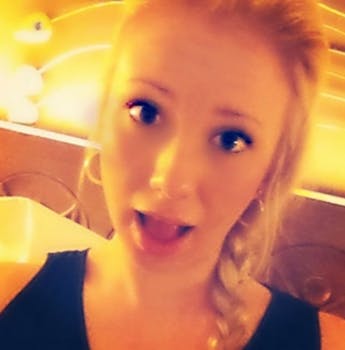 It seems like just yesterday Eminem was verbally assaulting “Kim” in front of his young daughter, Hailie Mathers. Now she’s speaking for herself on Twitter.

Allegedly tweeting under @hailiejade_x, the 16-year-old teen turned out about as normal as one could being raised by the notorious rapper. She joined Twitter in October 2011 (her first tweet was toward Justin Bieber, natch) and her account is basically a collection of pictures doing annoying, teenage things.

Look how edgy she is flicking off the camera or at this picture of her sipping on Smirnoff Ice (which is in a can now?) with her girls. Of course, there’s the obligatory pursed-lips iPhone photo in a bathroom. Even her dog is terrified of her pursed-lips.

She’s also very political and well-versed with YouTube videos, tweeting: “It’s crazy how fast #kony2012 has spread. But either way, people need to continue to spread it –#STOPKONY !!! #UsaAllTheWay <3”

Anyway, there’s been a bit of confusion of who the real Hailie Mathers is on Twitter. An imposter named @Angry_Blonde, who calls herself Hailie, has managed to rack-up 20,000 followers. But that’s not her, as Huffington Post U.K. gleefully confirmed.

This account is probably her real one, since she only follows five people who seem to be her girlfriends in Michigan and One Direction’s Harry Styles. (She’s so over Beiber since he didn’t follow her back.)