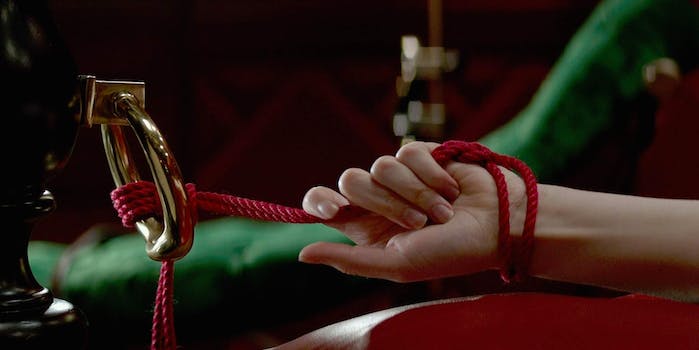 'Is there a safe word which will stop you from writing anymore of this bollocks?'

Oh, E.L. James. Didn’t anyone warn you that the Internet is not exactly a playground?

When Fifty Shades of Grey’s U.K. Twitter account announced a Q&A with the series’s author on Monday, her fans weren’t the only ones dying to ask her a few, erm, important questions. Unfortunately for the fanfiction-writer-turned-millionaire, Twitter users brought their A-game—that is to say, they were cruel and unrelenting in their online reaming of James.

It started off innocently enough, with actual fans asking James serious questions about the series and its latest spinoff, Grey.

Now that you've finished writing #GREY how would you describe Christian w 1 word?#askELJames

It seems that the genuine curiosity about James’s work stops there, however. Despite commercial success, the series has received tons of criticism from audiences that found it to be a paragon of abuse rather than a love story, and many Twitter users took advantage of the opportunity to publicly bash James for “romanticizing abuse.”

Do you know how heartbreaking it is to see all the girls my age dreaming of such an unhealthy relationship? #AskELJames

#AskELJames How are girls supposed to form healthy relationships if this is what they're taught is true love? pic.twitter.com/c9qHL1ZyrL

#AskELJames Is there a safe word which will stop you from writing anymore of this bollocks?

It’s not just readers who’ve noticed a pattern of abuse in the series. A 2013 Michigan State University study found that many aspects of the story are consistent with the Center for Disease Control and Prevention’s definition of intimate partner violence, concluding that 50 Shades perpetuates violence against women. Many domestic abuse survivors have spoken out against the series for promoting the unhealthy relationship to impressionable readers. Some Twitter users noted that, rather than respond to and engage with survivors of abuse, James chooses to block and ignore such inquiries.

#AskELJames Are you getting tendinitis from having to hit "block" so often :(

#AskELJames If there's no abuse in your books, why are you unable to defend it to survivors & charities, choosing to block/ignore instead?

While many used the Q&A to start a larger dialogue about controversial aspects of the series, some users opted to keep their bashing on the lighter (yet still hilarious) side.

#AskELJames did you fire whoever thought this was a good idea

#AskELJames How many times a day do you think Charlie Hunnam just laughs with sheer relief?

Others used this opportunity to take a (not entirely unwarranted) dig at James’ famously poor writing skills.

Did you know how to read when you wrote Fifty Shades of Grey? #AskELJames

Of course, no Twitter Q&A with E.L. James would be complete without its fair share of jokes about her ripping off Twilight.

#AskELJames How does it feel to have actually written a worse love story than Twilight? That is real skill.

#AskELJames Have you financially compensated Stephenie Meyer for monetising your fan fiction using her characters?

#AskELJames What's the minimum distance you have to stay away from Stephenie Meyer at all times?

And last but not least, one brave user went straight for the jugular, summing up everyone else’s questions in an impressively succinct manner.

It’s probably safe to say that E.L. James might want to take a short hiatus from Twitter (or the Internet in general) after the brutality of that Q&A. Allow us to get you some ice for those burns, girl.

Screengrab via 50 Shades of Grey