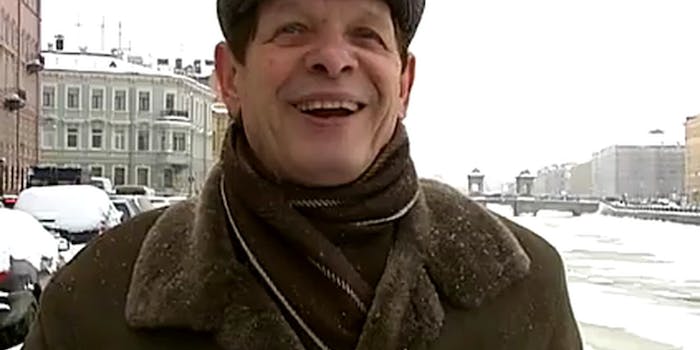 The triumphant return of Trololo

From Russia to YouTube with love, and back again—Eduard Khil is still singing his hit number.

In 1976, Eduard Khil sang a song that made its way onto YouTube and became known as the “Russian rickroll”—the kind of video you post when your friends are expecting something slightly less awesome. It turns out Khil is still alive, still singing, and still epic.

The crafty users of Reddit dug up a recent video of Khil apparently delivering an impromptu performance of his song on the street. It was uploaded in April 2010, but its appearance on Reddit is sending its views soaring past 50,000.

Most viewers have no idea who Khil is, though one commenter declared him the “Internet’s president.” He and the song blew up in popularity after a someone uploaded the Soviet-era video to YouTube. A vocalized version of a popular song, his performance sounded to some like he was singing “LOL,” the way Internet people who are silently smirking at their laptop screen claim to be laughing out loud.

Khil is a celebrated Russian singer who described the original intent of the song as a cowboy riding a horse to a farm. His Internet fame isn’t lost on his countrymen, either: They recently hosted him in a meme-laden stage performance on a popular variety show.