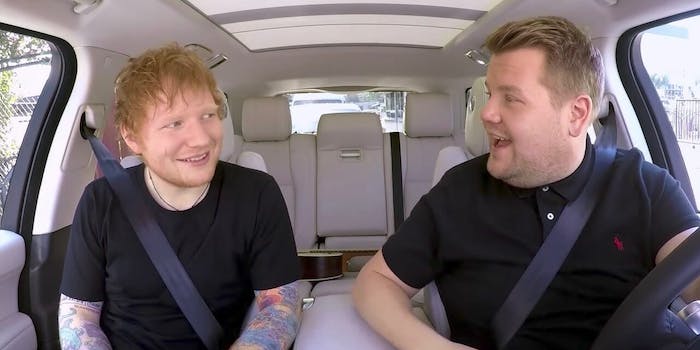 One of the biggest names in pop right now stopped by.

Ed Sheeran finally joined James Corden’s Carpool Karaoke, bringing with him a mix of tunes, stories, and a Malteser-filled competition.

Sheeran dropped in to pick up his guitar but stuck around to perform some of his biggest hits with Corden like “Shape of You,” “SING,” and “Thinking Out Loud.” In between singing, they touched on how Sheeran only communicates by email, the one time Justin Bieber asked Sheeran to hit a golf ball out of his mouth after going to a dive bar in Tokyo, and how Sheeran uses his guitar to break awkward tension.

But after Corden read that Sheeran could fit 47 Maltesers in his mouth, they competed to see who could fit more in. It’s not even close.

Sheeran and Corden even had enough time to come up with a new song. Turns out “Castle on the Hill” works perfectly as a backdrop to vent about Los Angeles traffic.