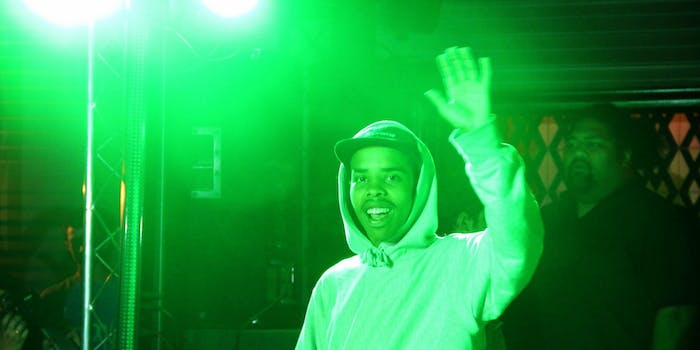 Sweatshirt's latest is an agoraphobic masterpiece.

Bill Murray and Jimmy Kimmel circled Earl Sweatshirt on their South by Southwest itineraries last week. The pair went out on the town during the annual music conference in Austin, Texas, with every intention to catch the 21-year-old Los Angeles rapper’s set. Murray kept calling him “Sweatshirt Joe.”

Sweatshirt, born Thebe Neruda Kgositsile, was a no-show. But the prodigious talent—beneficiary of a five-year-strong hype cycle—can be excused for reportedly skipping one of the countless shows crammed onto his plate last week. If his new album I Don’t Like Shit, I Don’t Go Outside: An Album By Earl Sweatshirt is any indication, Sweatshirt is a massive introvert who hates handshaking industry strangers, especially after Columbia Records apparently botched his promotional release strategy.

“How are you doing and what’s your motive?” he asks sullenly on “Off Top.” He’s been a high-profile artist long enough to experience a parallel romantic relationship and see it crumble like his bounty of herbal nugs. His grandmother passed away, and he’s reverted to drinking white wine—a housewife essential—at home as a coping mechanism.

But the despair facilitates and fuels Sweatshirt’s music. A member of controversial, misfit-kid supergroup Odd Future, Sweatshirt forfeited assistance from his clan’s production talents to unravel his feelings and lyrics over self-starter beats he crafted under the alias “randomblackdude.” Nine of the album’s 10 songs (dispensed over 30 minutes) are Sweatshirt originals, and the end result is as gloomy, anecdote-driven, and self-involved as an Elliott Smith record.

He tinkers with sparsely arranged beats that kind of remind you of old RZA tracks—here’s a little piano sample and it’ll ping over a mushy drum conveyor belt. Between orchards of multisyllabic raps, the tapes run and the end result is a vibrant, digital age Petri dish layered with snippets of conversations and coughs. The actual rapping is technical enough to be fifth best of all time (like, ever) in terms of structure—at least according to a Finnish data-mining algorithm.

During SXSW, I caught Sweatshirt at the makeshift Pandora House where he shared the stage with gregarious party guys like Fetty Wap, Rich Homie Quan, and Atlanta triple-threat crew Migos. That is, I showed up on time to catch the show only to stumble upon a one-in-one-out showcase wherein roughly 80 young fans stood outside filming the visible-from-the-street performance with phones.

Sweatshirt was a hammer, mildly engaged and intentionally picking dense passages for call-and-response gimmicks. There’s a deadpan wit to his music: On “Inside,” Sweatshirt precedes a verse by ironically telling his producer (who, again, is Sweatshirt himself), “You crazy for this one.”

Sweatshirt is one of the Internet’s truest rap icons. He’s of a generation that never lived offline, and his old-school frame of references are mid-aughts rap blogs like Nahright; Tumblr; and, as he admits during “Off Top,” the Motorola Razr. Beyond the circumstantial come up, Sweatshirt’s Web presence initially built his legend: He was discovered on Myspace toward the end of its dynasty. When early Odd Future rap videos went viral, his mom, UCLA law professor Cheryl Harris, sent him to a therapy center for at-risk boys in the Samoan capital of Apia. As Odd Future rose ranks, it’d perpetually rock winking “free Earl” gear. When rap fans finally heard Sweatshirt with his brethren on the 10-minute crew cut “Oldie” in early 2012, the kid was a man among boys on the mic.

Yet Sweatshirt is textbook American teen burnout. Bored, isolated, and unwilling to cop to a searing need for human contact and validation. His dad split early and his mom is busy, making Sweatshirt an Internet-addicted rich kid who needs to pop Xanax before flights and smokes. “Find me some Indica, nuggets on my fingers and my shirt like they was chicken crumbs/Room spinnin’ finna yak if I don’t hit the blunt,” he raps on “AM // Radio.”

I Don’t Go Outside is music for picturesque spring days—the kind you feel bad about spending in front of the laptop but do nonetheless. Sweatshirt realizes that even though he can’t go outside without “100 kids” flocking him, he might as well snap an Instagram with them because “they the reason that the traffic on the browser quick.”

In 2013, I raved about Kanye West’s newfound knack for brevity: “A 10-song, 40-minute ride, Yeezus might be the best album of the on-demand Spotify age.” I Don’t Go Outside follows the same digestible formula but in practice the thing is velvet-cake rich. The aggressive minimalism leaves him nowhere to hide and Sweatshirt pours up one cutting throwaway line after another: “I’ve been trouble since I stumbled out that stroller,” his beats sound “like a gavel,” and he has “50s in my pocket falling out like fucking baby teeth.”

What’s centrally thrilling about Sweatshirt’s success is the idea that an album phrased like a spiraling, fuming Facebook thread—that meditates on unpleasant human stillness for 30 minutes—can breakout in such resoundingly meritocratic fashion. The times call for a timesuck browser tab, but good luck getting any work done while I Don’t Go Outside streams.