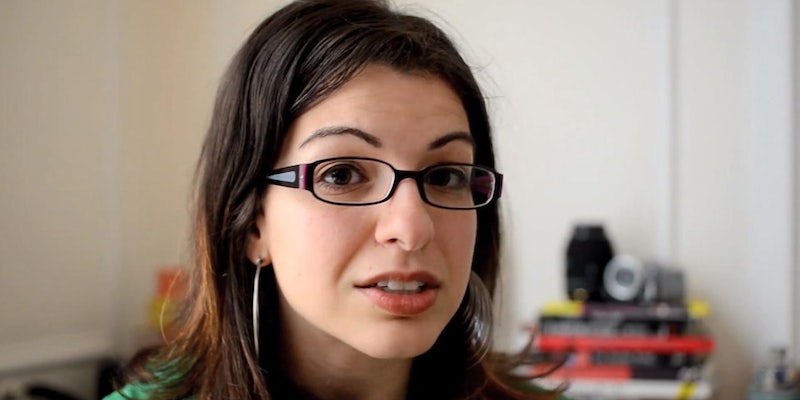 It's a familiar thread in gamer culture: the exclusion of women and hostility towards those who try to talk about misogyny in gaming.

E3, the Electronic Entertainment Expo, is one of the biggest annual conferences in the gaming industry. Like any geek gathering, this year’s conference, happening this week in Los Angeles, has its share of familiar names and big surprises. But while most geeks are reacting to classic Nintendo games revamped for Wii U and Sony’s unveiling of its $399 Playstation 4, others, including Anita Sarkeesian, are facing down that other familiar thread of gamer culture: the exclusion of women and hostility towards those who try to talk about misogyny in gaming.

Before today’s unveil of Nintendo’s Zelda revamp and its all-new Super Smash Bros. relaunch, yesterday’s attention was on Microsoft and the new Xbox One, a cloud-based, online-driven platform due out in November to the tune of $499. Perhaps because Sony’s just-announced Playstation 4 costs a hundred dollars less, Microsoft chose to focus on its new array of games: 15 new franchises debuting exclusively in the first year after the console’s release.

Microsoft’s crop of Xbox games had some old favorites, like Metal Gear Solid, as well as some totally new offerings, like Ryse: Son of Rome. There was just one problem, as media critic and frequent target of gamer hatred Anita Sarkeesian pointed out on Twitter:

Thanks #XboxOne #E3 press conference for revealing to us exactly zero games featuring a female protagonist for the next generation.

While Sarkeesian didn’t tie her tweet to the larger agenda of her “Tropes vs. Women” vlog series, which looks critically at the representation and depiction of women in the media, her detractors didn’t wait around for her to make a case. Many of them launched into hateful tweets, a collection of which Sarkeesian shared later on her Tumblr.

“Below are some of the Twitter replies to that observation which exemplify the male privilege and male entitlement endemic in the gaming community today,”  Sarkeesian wrote. “This is also a window into what it’s like to be a female video game critic on twitter.”

@femfreq You are one dumb cunt, I mean that sincerely from the bottom of my heart.

@femfreq You can already play bejewelled on your Obamaphone; if women bought games in significant numbers, the free market would provide.

Perhaps the most disturbing of the many responses that Sarkeesian received was this one, a tweet which referenced the other arguably sexist component of Microsoft’s event—namely, an attempt at onstage banter that quickly grew into what was arguably a thinly veiled rape joke that made many onlookers uncomfortable.

The quote in the tweet (from a now-deleted user) references a line from some awkward banter at the Xbox event featuring a male producer of the game Killer Instinct and a female Xbox community manager who were duking it out during some example gameplay.

The banter between the man and the woman, while unscripted, featured wisecracks about the female player’s game skill as well as an exchange that raised plenty of eyebrows. As Huffington Post transcribed it, the rape joke provoked chuckles from those in attendance:

“I can’t even block! You’re too fast,” the woman shot back.

“Just let it happen, it’ll be over soon,” the producer replied, which prompted audible laughter from the audience.

“You have a fight stick!” the manager pointed out.

“Wow, you like this,” the producer claimed as he increased his lead.

“No, I don’t like this!” the manager shot back.

Writing about this incident later, Badass Digest’s Devin Faraci pointed out, inadvertently, that the factors that prompted Microsoft to stage a gaming scenario which put the female player at a disadvantage are the same factors that kept it from debuting any games with female protagonists:

[T]here’s a boys’ club mentality to gaming that ends up making women feel very uncomfortable. … [T]he reality is that so much of this comes from the top down, starting with the design and implementation of female characters in games and ending up with displays like the tasteless bit of banter at the Killer Instinct demo at the Xbox One keynote at E3 today.

Microsoft explained to Kotaku, “The demo was meant to include friendly gameplay banter and there was there was no ill intent.” But, evidenced by the angry responses to Sarkeesian for simply pointing out the lack of female representation, intent means little in an environment as frequently toxic for women as gaming.

Even off the conference floor, women have had to deal with constraints and stereotypes about their presence at this year’s E3. A misguided article by Forbes that attempted to tell female gamers how to dress respectably at the conference had to be revised after it prompted outrage from gamers.

The news for women at E3 hasn’t been all bad, however: EA’s Mirror’s Edge and Bioware’s Dragon Age: Inquisition both feature female protagonists and are generating strong conference buzz. And video game advocacy group Women in Video Games International is claiming to have received more than 5,000 RSVPs for its E3 event.

If game developers can start paying attention to those numbers, then perhaps next year’s E3 will be a different story for its female attendees.