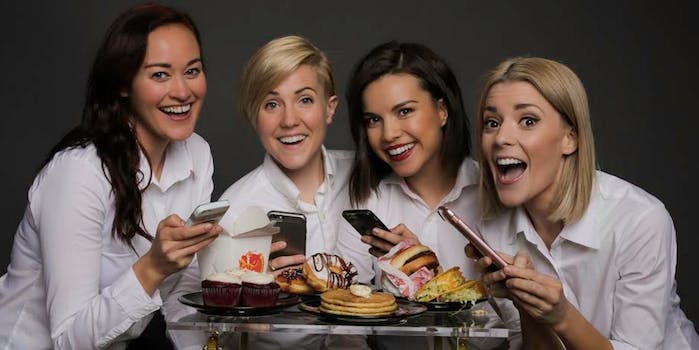 With more than 20 million combined followers, you'll be hearing about these 'Taste Buds.'

YouTube‘s Holy Trinity, plus one, will make their next adventure a culinary one.

The convergence of social technology and food content has been one of the biggest areas of digital innovation as of late. Dysh falls in line with the trend, and allows users to rate menu items on a 100-point scale, giving a refined value instead of a simple, “try the burger!” review that populates competing apps.

The two Harts (unrelated) and Helbig have partnered in various combinations before for a variety of projects, including films, webseries, tours, and countless YouTube collaborations. Nilsen is new to the fold, and has been dating Hannah Hart, best known for her My Drunk Kitchen series, since her public coming out. The foursome will take equity in the company and serve as “Taste Buds” according to founder Ashley King.

“Not only are they perfect examples of what it means to be Taste Buds— they trust each other’s tastes and have fun sharing their culinary lives with one another,” King said in a press release, “but they also bring a social and business savvy to building a platform for millennials.”

They’re working on more than just social promotion. The foursome has been integral to the development of social aspects, like the app’s commenting system, according to the company.