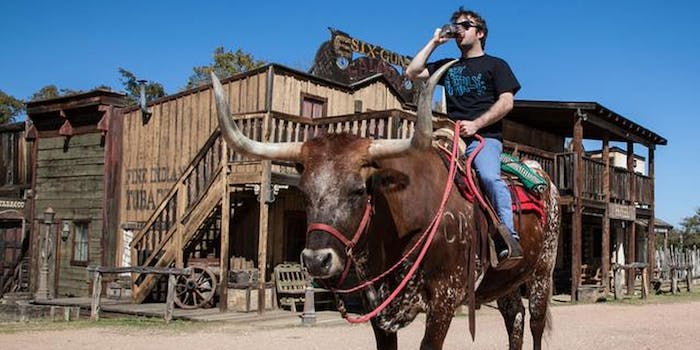 ‘Drunk History’ knows how to party

“That’s what I always wanted to make sure the show was,” Derek Waters says. “Just frustrated passion.”

There’s a certain mental gymnastics that happens when drunk people tell stories. My father is a long-winded storyteller, and if I’ve engaged him in a story, I often have to be there on the periphery, shifting the focus back to the tale in his head, elbowing away the inevitable tangents. This is sort of what Derek Waters does as host of Drunk History.

The show started out as a Funny or Die series co-created with Jeremy Konner in 2007, and it made a name for itself there and on YouTube. In 2013, it debuted on Comedy Central because, Waters says, they “respected it the most.” Other networks told him they wanted to take “drunk” out of the name, or that he didn’t have the energy to be a host.

“[I told them], ‘We’re not making Party-Time History With Carson Daly.’”

He’s actually the perfect guide for this type of show. Waters is low-key and reserved but quick with a joke. He often fills in supporting roles in skits, steps in with words of encouragement when a besotted storyteller starts doubting their performance, and acts as a gentle guide when they start repeating themselves, as drunks telling stories often do.

He’s their caretaker, but he’s also careful not to exploit the comedians. In past episodes, narrators have often had to stop a story to vomit. Waters says he decided to stop showing that part of the experience in season two.

“I think it’s close to saying, ‘You’re a good nurse,’” he says. “You’ve got to take care of these people, because they’re not all there.”

Waters explains the idea for Drunk History came when longtime friend Jake Johnson (New Girl) tried to drunkenly tell him a story about Otis Redding, one that “should have been three minutes long, but took about 45 minutes to tell.”

“And he was just so passionate,” Waters adds. “And I wanted to reenact having Otis Redding move his lips to Jake’s words. And Otis looking at the camera like, ‘C’mon, man, I didn’t really say that.’”

And who better to deliver three-minute stories than comedians, who have to remember a beginning, middle, and end to a joke. “Nothing’s scripted,” Waters says. He meets with all the performers beforehand and goes over the story, but when they film the episode drunk, they’re just attempting to remember it. And, ideally, the “passion overcomes the drunkeness.”

“That’s what I always wanted to make sure the show was,” Waters says. “Just frustrated passion.”

Drunk History has a research team, which checks facts and scours for lesser-known stories about historical figures, so they can take Abraham Lincoln and “find a story about him that very few people know. Like in [tonight’s] episode,” Waters relates. “The Baltimore one. How he almost got assassinated on his way to D.C. when he was inaugurated. Did you know that?”

Historical fact is easily skewed on the Internet, where everyone can be a revisionist. Waters sees Drunk History as a different approach to the truth about history. The storytellers may be drunk and loose with words, but they strive to get the facts right.

“It’s a history show,” Waters says. “The comedy’s only that a drunk person’s telling it. All the stories are true.”

The flow of the episodes is often the same: A performer starts off a little tipsy, then becomes a bit more wrong-eyed or effusive throughout the story. A medic is always on set, as is a breathalyzer. Waters won’t reveal his limit for storytellers, but says he usually lets them get pretty hammered. From his many sit-ins, Waters has extracted a certain psychological profile for drunk storytellers.

“There’s a fine line of stage one of drinking,” he says. “The happy-go-lucky, and you’re on camera and you’re trying to be funny. It takes about an hour or two to get rid of that. As soon as they start repeating themselves, that’s when it starts getting good. It’s very interesting.”

In one episode, Jen Kirkman comes close to tears in her passionate retelling of Oney Judge’s slave story. She was also in early Drunk History skits, and Waters credits her with shaping the tone of the show, moving it away from the “frat party mentality”—referencing one demographic that might relate to the show—and toward a bigger fanbase.

When asked about guests he’d like to have on, Waters confirms he’s a huge Pearl Jam fan, and a dream episode would be getting drunk and telling the story of Pearl Jam, then having the band reenact his story, which he calls “jumping the shark.” Al Pacino, Bill Murray, and Dustin Hoffman are also on his dream list of reenactors.

By highlighting these lesser-known stories, via comedians and famous actors, Waters is keeping the concept of storytelling alive, in a time when TL;DR has become a refrain. You could learn something; it just might take a while to get there.