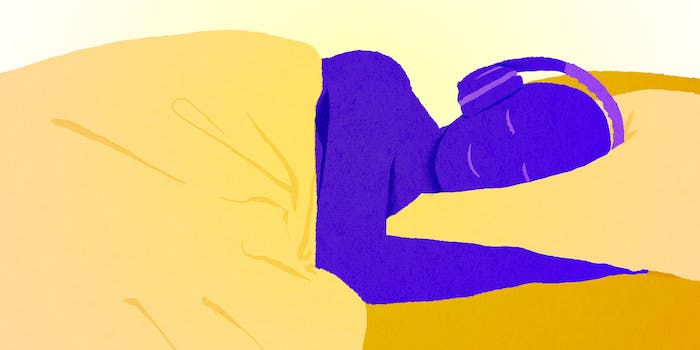 Drew Ackerman wants you to sleep with his podcast

Put the Ambien down. 'Sleep With Me' is the only sleep aid you need.

The chronically sleep-deprived will go to any lengths to put their racing brains at ease, to spend the following day in a rested, normal state of mind. The worst will jump from treatment to treatment, only to discover that binaural beats are just annoying and Ambien just makes children’s shows better. It’s possible they’re fighting an unwinnable battle: Some research shows that some people are congenital insomniacs, with their genes and the woes of evolution dooming them to late nights that are simply unavoidable.

Some research shows that some people are congenital insomniacs.
Drew Ackerman proves that research wrong.

When Drew started the Sleep With Me podcast two years ago, he realized that, after a slew of prior creative ventures, he’d at last discovered his voice as a performer: He was boring. Armed with nothing but his own voice, he could ensure a complete lack of dead airtime with a remarkable ability to drone on (and on and on) about utterly meaningless drivel. The podcast is a mixture of real, written stories that Ackerman’s outlined and tangents woven into them that are 100 percent stream-of-conscious ramblings.

The result is something that can put any semi-recumbent human wearing headphones to sleep within 20 minutes. Tops.

A lifelong insomniac myself, I put Sleep With Me to the test: I listened to it on headphones while lying in bed at night for five nights in a row. The result: overwhelming success. But don’t take my word for it—take a look at the show’s iTunes ratings, which are filled with insomniacs praising the podcast’s effectiveness. Of the show’s 696 iTunes ratings, only a handful are not the full 5/5.

As “Dearest Scooter,” Ackerman essentially tells bedtime stories, with each episode’s story taking place in one of the strange worlds he’s created and expanded through sheer will. Take the storyline of Game of Drones—Game of Drones, SWM’s take on Game of Thones, is described on one episode by:

How far can an arrow travel through your dreams if you are in a flash frozen state creating by a “Black Magic Woman”? Why don’t we ask the Blackfish, the Bear and the Maiden Fair.

Ackerman has hit upon a winning formula—he’s created a style that’s hilariously loony when listened to in a car, and simultaneously a potent sedative if listened to through headphones on a bed. It’s impressive as a form of entertainment, but I’m beginning to think it’s also some sort of strange, accidental breakthrough in science.

The Daily Dot sat down with Ackerman to discuss the show’s writing process, goals, and future.

When did you first decide to start doing the podcast? Did the idea evolve along the way, or did you know right off that this was the format?

I’m pretty shy and introverted—but I’ve always been good at making up stories. So if we were sitting around or something, it’d be like “Oh! Give me some more…” and I’d make up a story, and it’d usually be silly—not great, but it’d be amusing.

So that was one part of it, and then the other part was just going back to when I shared a room with my brother, and we used to tell each other stories to help each other fall asleep. So I thought about it, and I thought “maybe I could do a podcast”…

And then I had been writing something with these two other guys, and it totally imploded, but I at least learned through that to be consistent about setting aside time [to write], because I was at least somewhat committed to it.

When that fell apart, I realized I still had that time set aside. Maybe I should just start that podcast? I thought I could figure out how to do it, so I started doing it. I didn’t plan it out, from a production standpoint. I listened to some podcasts, and read a bunch of stuff on the Internet and YouTube, and then I just started doing it. I didn’t have any following, so I didn’t have to worry about anyone’s expectations. I had nothing to lose by putting it out there.

I had more to lose by trying to be a perfectionist and get it right. So I just started doing it, and as I’ve been doing it, and I’ve been tweaking it and learning little by little.

Have you written more for each episode as it’s progressed, or has the format become natural enough to you that you can just write maybe one word and know all the stuff that it means?

I definitely write more now, for the serial stories. I’m more focused, and I spend more time. I finish one, and then I have a week until I record the next one, so I have a week to write an episode.

I have a day job, so over those seven days, when I have time to write, it’s usually on the train or on the bus to work. If I don’t feel like writing, or I’m not focused on daydreaming, there’s a huge downside to that, come the seventh day when I have to do the show… The less prepared I am to do the show—it doesn’t have to be scripted, but I have to have a foundation to give me a sense of comfort. Otherwise, I feel terrified, and it just becomes a lot more work to keep myself calm and stay with the story, and I might procrastinate, and then I get more anxiety.

Before the podcast, I was trying to write some Web comedy with a couple other people and then trying to write screenplays in my spare time, and it’s a lot of work. Trying to re-write it, and trying to follow through… At some point, you find your voice, and I think in the Web comedy writing, I found a little bit of my voice. But then the podcast, and being boring, oddly enough, and going on these tangents, it’s like “OK, this is my voice.” I mean, I have people listening, and it’s working. I’m not making any money off of it or anything, but it’s putting people to sleep, and there’s people who are listening to stories, and I’m following through on it, so it’s weird to say, but that’s pretty successful, you know?

Having a lot of episodes that are released on a regular basis is a huge part of calling any podcast a success.

When I first got into it, there were still people, even two years ago, who were like “Oh yeah, podcasting is about to blow up!” or “There’s all these people making money!” But the podcasts that were making money, they’d been making them for so long, like Nerdist, Marc Maron, they’ve been making podcast for four or five years, you know? So I was like, “If I can make it to two years, then I can reassess and figure out if there are other options.” It’s one of those things that takes a lot more work and time, but the time goes by kinda fast. Or at least it’s felt like it for me.

I noticed that if I listened to a podcast while driving, it wouldn’t make me sleepy whatsoever—I would just be laughing at the story being told, and it was just hilarious. But if I put on headphones and laid in bed, I’d be laughing for about 20 minutes, and then BAM, I was just asleep. I think it’s really cool that the podcast can accomplish both.

It’s funny, but headphones can add this element to podcasting. You can listen in the car, and that’s great, and that’s [one] context. But headphones add this level of intimacy, and I think that’s like part of the element that helps people fall asleep.

Yeah, headphones take something from being an environmental sound to being your entire auditory system.

That’s one thing I always think about. Like, with the listeners, they don’t know me, and they’re listening to me in their headset in their bed, and that’s why I take it pretty seriously—that takes a real leap of faith, to be like “I’m going to listen to this odd man and go to sleep to him,” especially the first few times. When I can win those people over, where they let down their guard, it really feels satisfying to win their trust.