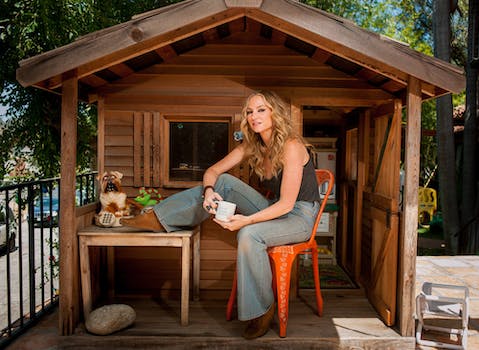 YouTube series ‘The Muthaship’ stars Drea de Matteo as herself

The Emmy Award-winning actress opens up her life in a new digital series.

When Drea de Matteo jumps on the phone to discuss the premiere of her new YouTube reality series, The Muthaship, she can barely get a word in before her young son, Blackjack, interrupts to try to show her his new skateboard tricks.

“That’s why I’m doing a reality show, right there,” de Matteo laughs. “So I can fucking keep him in skateboards and scooters, and to pay for his emergency room visits because he’s such a crazy person.”

De Matteo says for years people pitched her reality shows, but her focus on making a name for herself as a serious dramatic actress had held her back. She won an Emmy for her portrayal of Adriana La Cerva on HBO’s The Sopranos and is wrapping up her work on FX’s Sons of Anarchy as Wendy Case.

“Constantly for years and years I’ve been asked to do a reality show,” she explained. “I’ve always said no. I’ve always been a little precious about my career, not wanting to tangle that up in anything, not wanting to show myself in any light but the characters I play. A lot of actors don’t feel comfortable in who we are; that’s why we start acting.”

Now, de Matteo says, she finally feels confident enough in herself to let the cameras in. However, it helped that the Endemol-produced show was shot entirely on iPhones by her personal friend, Carter, which made the experience less like a reality show, and more like a series of home videos.

“I never thought we were really shooting anything,” she explained. “I never felt like I’d committed to anything. I was nervous; I had a lot of trepidation about doing it because it was the one thing I swore I would never do. But I did it for a lot of reasons. One, for a paycheck, to be honest. Two, my friend gets a job. Carter gets to stay in L.A. and work. I’m all for keeping us together. … And I also feel comfortable being myself more at this point in my life than I ever have. I always wanted to hide behind a character. Now that I’m a mom of two kids, I don’t mind being myself.”

For de Matteo, the Internet and social media are a veritable wild west. She only this year got a Facebook and an Instagram, but she claims to live under a rock and is super focused on her life as a mother instead of trends. She says she’s not fully aware of the breadth of YouTube and viral stars, but she was especially struck by Vine star Brittany Furlan and her creativity.

“She’s doing pure, artistic comedy in six seconds,” de Matteo enthused. “I was completely fucking blown away by her. I wanted to throw her out there and say don’t anybody fucking tell you that you can’t make your dreams come true. If you’re talented someone will find you. But I suppose if you’re not talented someone will find you too, since some of these kids have no talent and are becoming overnight sensations.”

For de Matteo, the thought of doing vlog-style work herself is outside of her comfort zone.

“I can’t even do a talk show,” she deadpanned. “I get too nervous just doing a talk show. If I had to talk about somebody else, it makes more sense for me, but to talk about myself for an extended period of time makes me feel an asshole. I know I have to do it as part of my job, but it doesn’t interest me.”

Originally, the show wasn’t even supposed to focus so intently on de Matteo.

“The original concept for my show was going to focus on all of my friends, and what it means to turn 40,” she said. “And how, when we turn 40, we regress, and youth really is not wasted on the young. We regress with all this knowledge and build up speed to move ahead. All the questions you had when you were 27 are answered, to a degree. There’s so much more at stake now, and the paths you take now lead up to the end of your life.”

In the end, though, the circus of de Matteo’s life and her lack of filter made her story the focal point. She filmed the show up to midway through the shooting schedule for Sons of Anarchy, and her budding YouTube stardom became the talk of the set.

“When the clips started airing and I had to go to work, all the guys at Sons were like, ‘what’s this Muthaship stuff?’ and I was like ‘oh fuck,'”she said. “When we were shooting The Muthaship, I had no idea where Sons was going. I still have no idea where Sons is going, except that it’s amazing. I only read pieces, and I didn’t want to hear them in the read-through. I do feel like it’s some of the best season finale episodes that television has.”

For now, de Matteo’s fans will experience a little overlap between her Sons character and her real-life persona, as the first episodes of Muthaship overlap with the finale of Sons. Although de Matteo wishes it could have been avoided, the juxtaposition of her different selves isn’t totally new, and at the very least it’s honest, which is what she strove for in this production.

Although de Matteo liked the iPhone experiment, and says Endemol has been great working with her on exactly what is out there from her show, down to video thumbnails, she thinks for a second season, she’d want to have more a production, now that she’s used to the reality show life.

“There is value in it, in actual production,” she explained. “The cameras don’t phase me. I’m used to being more alive when the cameras come on anyway. I don’t even recognize a camera in the room; it means nothing to me. And I don’t have an edit button.”