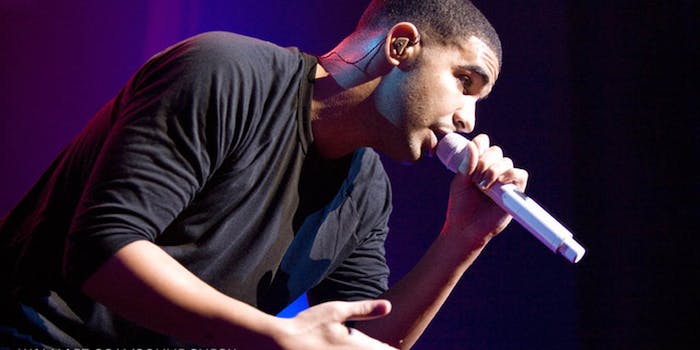 Crew Love: The case for Drake

Drake has been a radio mainstay since early 2009, and five years of the spotlight is enough time to assess his impact on rap.

In Spotify Essentials, the Daily Dot curates custom playlists created by some of our favorite artists, staff writers, and Web community leaders. This week,  Ramon Ramirez and Matt Borcas make a case for Drake.

If major labels operated like NBA Drafts, Drake would undoubtedly be the No. 1 overall lottery pick, not Kanye West, because of his youthful upside, inherent relatability, and heartthrob appeal.

Earlier this month, a photo emerged from his hot new posse cut with BFFs DJ Khaled, Rick Ross, and Lil Wayne, “No New Friends” video shoot. It features Drake strutting his stuff in an extremely passé Dada Supreme sweatsuit, and it’s totally f’ing hilarious. Two things: 1) Drake is the only rapper of any import who would be roundly mocked for wearing this. Kanye West and A$AP Rocky would be hailed as ‘90s revivalists, 2 Chainz and Juicy J would be given a free pass because they are never not on drugs, and it would actually look sorta good on Rick Ross. 2) The silent majority of rap listeners—i.e. teenagers of suburbia—would also definitely not get away with a Dada Supreme sweatsuit, bringing us back to Drake’s relatability.

To wit: His bottom was a residential Toronto neighborhood, not the trap. He starred in the second-best North American teen drama of all time (after Zoey 101), Degrassi: The Next Generation, and loves tuna sandwiches as much as he does bad bitches. Hell, he spends his free time playing Scrabble with his mom.

But here’s why Drake is important: Other top 10 selections in this figurative A&R rep draft would include imitators like Rocky, B.O.B., Travis $cott, and Kirko Bangz—charmers that dip into the R&B pool by way of lovemaking themes, smooth and brisk flows, and yes, some occasional singing. Their blueprint for success also factors in an acceptance of an aesthetic that allows for hip-hop kiddos to be fully integrated into a mostly white indie-rock culture.

Drake has been a radio mainstay since early 2009, and five years of the spotlight is enough time to not only assess and itemize his songwriting but also take a wider pan backward and look at the genre in his wake.

Before Rocky was tag-teaming with Skrillex, Drake’s masterful 2009 mixtape, So Far Gone, fabricated collaborations with Gorilla vs. Bear favorites like Lykke Li and Peter, Bjorn, & John. These were not samples but full on duets wherein Drake’s producers used studio pirating to layer Drake’s singing on top of the original songs. Add a male part to Lykke Li’s “Little Bit,” and it deftly transforms from isolated window-sill despair to an adultery rich conspiracy.

You know how sometimes a coffeehouse guitarist will cover rap songs and it’s kinda racist? Covers of Drake are not racist, and that’s kind of amazing. Sonnymoon’s crack at “Houstonlantavegas,” with its operating monitor blips and female vocals, is downright beautiful. Drake’s work is universally vulnerable.

A wide chunk of credit goes to Drake’s tightly knit team of producers, chiefly his BFF Noah “40” Shebib. His beats have simple, effective drum loops, lots of piano, and sample from the indie rock flavor of the month. The uptempo offerings like “F*ckin’ Problems” pound with bass and ride in the sedan like suburban moms; the smoother canvases are inviting Jacuzzis for R&B raconteurs like The-Dream.

In fact, one of the most interesting mini-movements in recent years is the resurgence of heart-on-the-sleeve R&B, now with self-aware and dark, minimalist auteurs like the Weeknd. Drake’s earnest popularity opened a door for these stylish bedroom manifestos.

The major net positive from the Drake years is that it has never been easier to be yourself in hip-hop: Want to revive the late ‘90s like Joey Bada$$? Or make Compton-based gangster rap in a collective called Black Hippy? Or leave the food truck game behind and pen similes about pork shoulders and chicken cutlets?

Drake has poured lean in Houston, caused riots on campus, and his music videos celebrate his Jewish faith by turning a bar mitzvah into a night club: Aggressive individualism is what the game is on.

Of course, popularity and influence does not a good musician make. Good music does, and thankfully Drake has made a ton of it, as the following playlist demonstrates. We’ve combed through his oeuvre, mixing chart-toppers with deep cuts, and everything in between, including selected works from rappers with familiar stylings.

Use this mix to bide your time until Nothing Was the Same drops, which may or may not be on August 27, and thank me later.