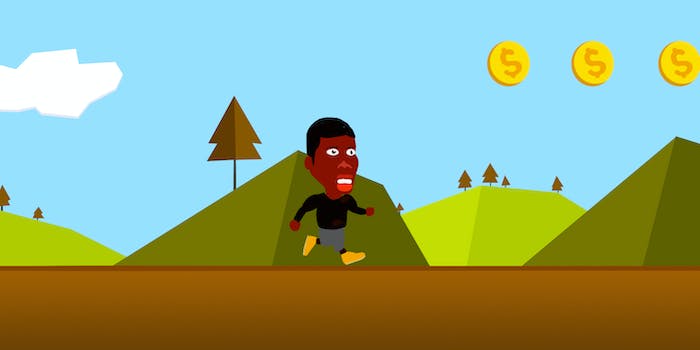 Not to say that it works, but…

The ongoing rap beef between Philadelphia street rapper Meek Mill and Toronto parkway rapper Drake has made its way to the 8-bit superhighway.

The mechanics are simple enough: You play as Meek(y) Mill and run to the right of the screen within a hilly, slightly wooded backdrop. Meanwhile, Drake, set inside some type of one-man spaceship that looks like a rock, shoots missiles at Meek, who also has to avoid spikes intermittently placed on the ground.

The game also guest stars 50 Cent tossing bombs from his own rock spaceship. The Queens rapper has been in the news lately for having Meek Mill diss songs written about him and subsequently firing back with Instagram Photoshops. Here, in Meeky Mill, he is the main enemy—appropriate for a game that is less concerned with saying anything about the rappers it features than than it is with cashing in on the rap beef hype cycle.

The group that made the game is made up of three music producers who have worked with the record label Def Jam and the television channel Adult Swim. Though this seems to be the group’s first game together, this is not their first foray into video games.

This Otaku Gang also made a dumb video where they reimagined Floyd Mayweather and Ronda Rousey as as characters from the classic arcade game Street Fighter (Rousey won by K.O.). The group’s website advertises that the video has amassed nearly 3 million views across YouTube, Facebook, and WorldStarHipHop. One of the group members, Richie Branson, also previously released Pill Bill, a game based on Bill Cosby in which you sidestep your martini glass from falling date rape pills.

Fortunately the Otaku Gang doesn’t always try to cash in on such gross subjects with Internet virality. The group recently used their music skills to mash up Notorious B.I.G. songs with Star Wars instrumentals just in time for the new sequel. Unfortunately, this Meeky Mill game is more sophomoric than inspired.

Going against my Windows antivirus software warnings and my own better judgment, I downloaded the game. It immediately froze my computer and flashed an alternating black and white screen when I tried to hit any keys. From the preview video, it doesn’t look like I missed much other than a caricature of Meek Mill. As of press time, the game does not work in the least, but it will have accomplished its goal, even if no one else besides me ever downloads it.