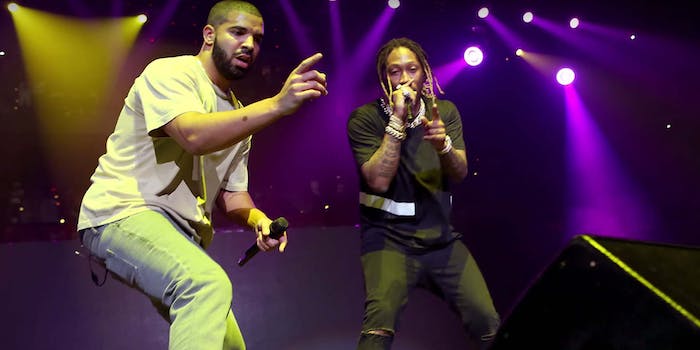 And with that, rappers Drake and Future beamed a new, collaborative record onto the Web late Sunday. The resulting What a Time to Be Alive is a focused effort that cracks open the padlock and lets loose two of music’s most turbulent ids. It bangs like the hardest NBA-arena music—specifically the trap anthems blared during pregame drills, before the rich people file in—but also makes abrupt turns and the bold choice to not worry about thematic unity and yielding the floor.

This is not a Watch the Throne situation, where accomplished talents like Kanye West and Jay Z cut loose and make snow angels. Here, Drake and Future are attending a team-building retreat, using it as therapy to let out demons.

It’s also the album of the year. It’s not the best album of 2015, but it exemplifies customs and perils of the moment. It will be a wellspring of nostalgia in 10 years for the millions of teens getting to and from their shifts at Chick-fil-A. It will be remembered fondly. Here are 10 reasons why.

Today an album can be booked and judged with a status update. For it to soar into more broad channels, it needs an immediate series of memes to swim.

The album also needs an elevator pitch. Can you explain its purpose in a single post? 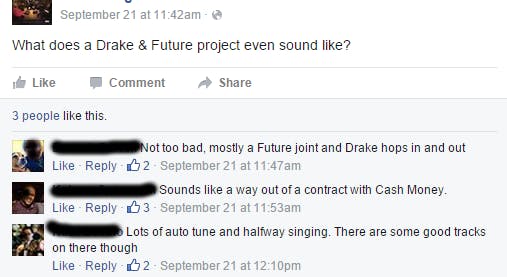 On “Big Rings,” Future first says his project’s title and lays out the album’s mission statement.

“What a time to be alive: I’m drinking lean. I thought I died.”

On “Live From the Gutter,” Future raps “these the times we gotta live through.” On “Diamonds Dancing,” that he’s “sipping on Dom Pérignon for no reason.” On “Scholarships” that he’s “balling out of control,” which is common slang, but Future means it literally. It makes for tense, backed-into-a-corner raps that lunge.

3) Metro Boomin as the third heat

The St. Louis-raised producer, Metro Boomin, stamps the project with his spaceship-breaching-Earth’s-atmosphere soundscapes. Born Leland Wayne, the 22-year-old has spent the past three years hulking out with a quartet of beautiful singles, “Where Ya At,” “I Won,” “Tuesday,” and “3500.”

He executive produced What a Time to Be Alive, working on seven of the 11 songs during its Atlanta sessions.

4) That Drake line about Robitussin

On a certain level, I feel absurd parsing the words because this project is less about fishing out subliminal Meek Mill disses than it is an ode to melting down in a studio. It almost recalls Free (Based Freestyles Mixtape), another dynamic-duo release from Lil B and Chance the Rapper last month where the gimmick is that lyrics are presented via extended freestyles.

But it’s also subtle and pointed. On “Jumpman,” Drake rhymes “them boys up to something” with “uh, uh, uh I think I need some Robitussin.” As Genius points out, beyond the stitched-together lyricism is a rim-hanging reference to that time Michael Jordan had the flu but balled out anyway during Game 5 of the 1997 Finals.

And then of course you have that sequence where Future makes “jibber-jabber,” “kidnapper,” “official trapper,” and “car-jacker” into gorgeous phrasing.

And we get to revisit a classic…

And immediately you’re like “shit do I have weed on me? OK great I don’t. Let’s turn down the Future at this red light just to be safe.”

It’s a conditioned reaction, and the album taps into its reclusive paranoia and shares with you this common American experience. Drake writes blockbusters, he wound up alongside dark, Halloween-basement beats. Just listen to the harrowing boom of “I’m the Plug.”

7) The cricket chirps on “Plastic Bag”

The track has lengthy, kind of unsatisfying similes: “I be in the club with them bands like I got the keyboard and the drums with me.”

Then Future slides in and name-checks all of the strippers he’s friendly with and shouts out going to idyllic Atlanta gentleman’s club Magic City on a Monday.

On the album closer “30 for 30 Freestyle,” Drake raps: “I just got me the Mercedes Pullman / You niggas never heard of it, you gotta hit up Google.”

Savvy content editors immediately did their search engine-optimizing due diligence and whipped up a functional headline like “This is the pricey Mercedes Drake wants you to Google,” then a condensed explainer. Thanks for the hot service-journalism tip, Drizzy.

The Mercedes Pullman, which relaunched for 2016 after last being produced in 1981, is essentially an expansion of the already large Mercedes S600.

It comes in at over 21 feet long  — four feet longer and four inches higher than the S Class — big enough to have two chairs facing forward and rearward in the back. Under the hood, it boasts a 523-hp 6.0-liter twin-turbo and a V-12.

The rebooted Pullman can be thought of as the heir to the Maybach, which Daimler AB discontinued in 2013.

It will certainly hit your wallet like one. The Pullman is said to start at 600K. But for the tricked out version Drake would be driving around in the price could flirt with seven figures.

You partner with a streamer of choice, in this case Apple Music. (The album played first late Sunday on Drake’s label’s OVO Sound Beats 1 radio show, an Apple Music exclusive.) You announce it suddenly and without warning. You play up the timeliness of the project. (What a Time to Be Alive was reportedly recorded in six days, which seems laborious but also excuses any sloppy edges; more importantly this factoid dials in on the recent past and how it shaped your current message.) When possible, you call this project an unofficial mixtape for the fans and thereby continue to build tension toward the official album release.

10) What a Time to Be Alive sounds like a video game where an alien travels to the ice planet Hoth and helps defeat bosses like Meek Mill, Drake’s exes, and sanctimonious fans of “real” rap

Does Drake continue to be somewhat clueless about his gross condescension toward how the women in his life should behave? All day—check the last two minutes of “Diamonds Dancing,” where he tells an ex that her mom would be “ashamed” that she’s acting so “ungrateful.”

But he warrants praise for ditching the comfort of his Toronto well-wishers and best buddy and production architect Noah “40” Shebib to try and hang in Nayvadius DeMun Wilburn’s Atlanta. Future is one of the last presidential cycle’s most innovative voices, and he just coaxed rap’s leading man to hang out in his living room, stash the cocaine in the couch, and peak through the blinds.