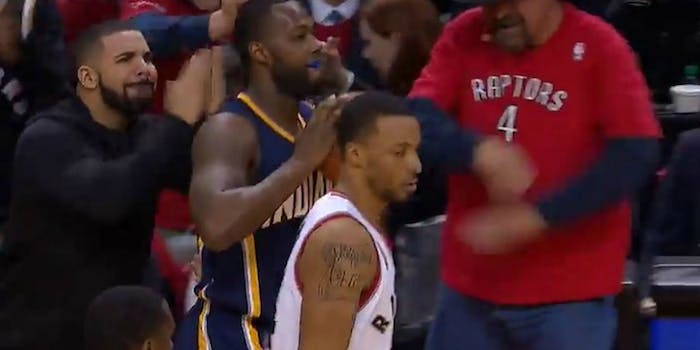 When it comes to being a fan of sports teams, Drake isn’t so discriminatory, and it’s not surprising that when a squad in any sport is playing well, he isn’t usually far behind trying to show everybody how supportive he is.

But it makes sense that the Canadian rapper would love the Toronto Raptors, and on Tuesday, as Toronto made a comeback victory against the Pacers in Game 5 of the NBA playoffs, he had no problem showing that he hasn’t lost his ability to play the role of obnoxious sports fan.

Piece of evidence No. 1: Here’s Drake reacting to Indiana’s Rodney Stuckey turning the ball over in the fourth quarter and falling out of bounds, nearly into Drake’s lap.

The clapping-really-really-hard move, of course, is only slightly more annoying than the slow clap, and here’s proof that his legitimate clapping style is a tad less aggressive.

Piece of evidence No. 2: Drake compounded the situation by treating Pacers star Paul George like he was Meek Mill by using his digital alteration skills and plastering a single tear on George’s face. Though Drake later deleted the Instagram post, SB Nation saved it as a screenshot. 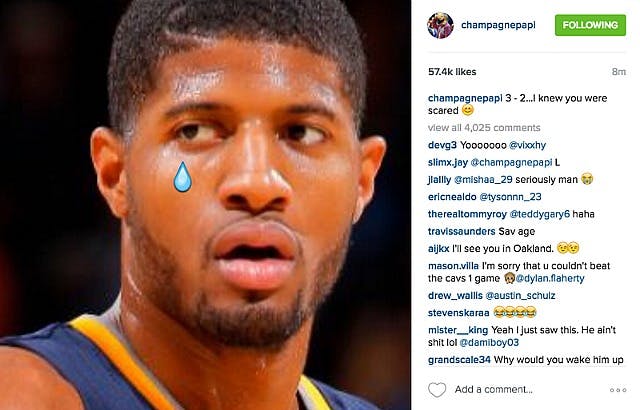 (For the record, George scored 39 points to go with eight points and eight rebounds on Tuesday, not exactly a scaredy-cat performance.)

It’s reminiscent of the Crying Jordan meme, but Drake perhaps thought better of the dis afterward, because the Pacers still have a chance to win the playoff series and send the Raptors home for the season.

But that’s OK. Even if the Raptors were to lose the series, we’ve seen in the past that Drake is a fan of a variety of teams and athletes.

Drake could just move on to somebody else. Like the Miami Heat…

Where can I go to spend $150 on this sweatshirt? pic.twitter.com/KD4UGIOlYI

…Or a number of English Premier League soccer teams…

Either way, we know who Drake is rooting for in the Toronto-Indianapolis series, and if the Raptors end up losing, there will be only one person who’s at fault. Like Serena Williams already knows, you can just blame it all on Drake.