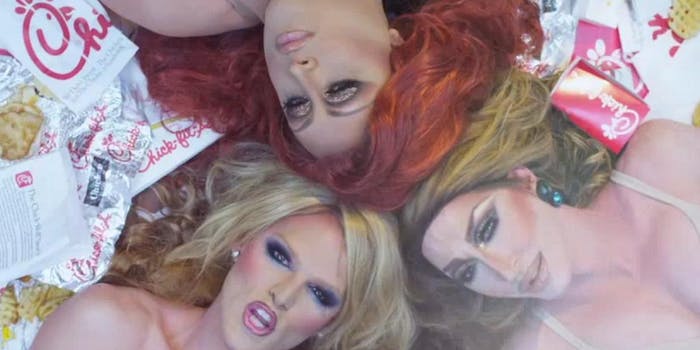 These drag queens might make you think twice about chowing down at Chick-fil-A.

Fast food chain Chick-fil-A is known for its chicken sandwiches but many people don’t know the company is run by a devout Christian who has donated thousands of dollars to anti-gay organizations.

In a new video “Chow Down (at Chick-fil-A)” drag queens Detox, William Belli, and Vicky Vox call out the 66-year-old fast food chain for what critics say is its anti-gay slant—all the while chowing down some chicken sandwiches

“Someday, somebody is going to make you want to gobble some waffle fries,” sing the ladies to the tune of “Hold on” by Wilson Phillips. “But no go, don’t you know Chick-fil-A say you make the baby Jesus cry.”

According to a study from Equality Matters, an LGBT organization that promotes equality, the food chain donated more than $1.1 million to anti-gay organizations between 2003-2008.

Since the video was posted two days ago, it has collected more than 186,000 views and 866 comments from people largely praising its candor.

“This is the best﻿ thing I’ve seen all month. Maybe all year. So far this decade,” commented bengraven. “Seriously, I’m buying the mp3.”

The Daily Dot has reached out to Chick-fil-A for a comment and is waiting to hear back.