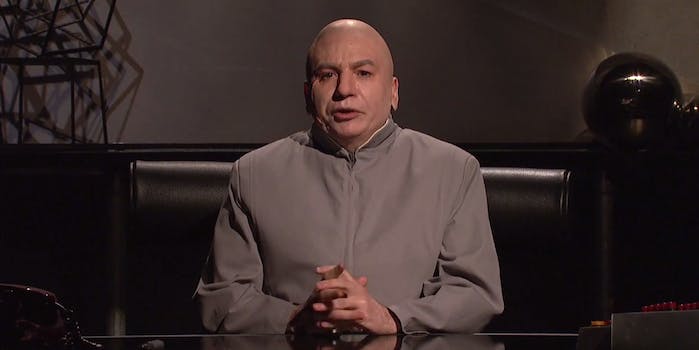 Dr. Evil is not very happy with Kim Jong-un

He's got some fair points.

Someone’s not very happy with how the Sony hacks have been going.

Interrupting what was supposed to be a “Very Somber Christmas with Sam Smith” on last night’s SNL, Dr. Evil got hold of the airwaves for a very important announcement. He’s not mad that North Korea—who U.S. officials announced is behind the hacks—managed to get The Interview removed from theaters. He’s furious because he knows evil and they’re both giving evil a bad name by fighting over a movie.

Having failed at world domination a few times now, Dr. Evil is well aware of what works and what doesn’t and wants to give Kim Jong-un some advice. Just take it from him, the actual GOP, and Uber. You don’t just take a movie out of theaters and hack some emails.