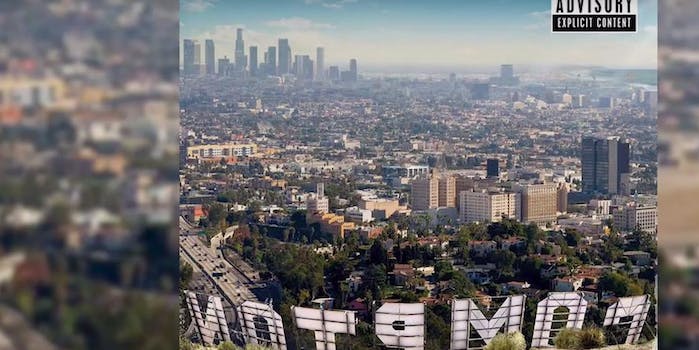 Somehow, some way, there is a new Dr. Dre album. In 2015. With Kendrick Lamar on it. And Ice Cube. Snoop Dogg, Eminem, The Game, Xzibit, and Cold 187um too. It is like an angel in khakis with a cuff and a crease answered rap fans’ prayers.

Remember, when 2001 came out (in 1999), it had been more than six years since Dre’s iconic solo debut, The Chronic. This newest album, Compton–which leaked, then exclusively streamed on Apple Music late Thursday, and hits iTunes on Friday–is 15 years and nine months removed from his last solo record.

In that time, Dre’s unreleased music took on mythical proportions. In 2001, Detox was supposed to be a hip-hop musical. By 2004, Dre was taking a break to work on other artists’ records. Then it wasn’t until 2010 that interest once again piqued, between the Compton, California, rapper Kendrick Lamar releasing the song “Look Out for Detox” and those embarrassing radio singles “Kush” and “I Need a Doctor.” Dre did a huge marketing campaign that involved a Pepsi commercial and at least one billboard. Most all conclusions were pointing to the album maybe actually for real coming out. And with the inclusion of Lamar, it looked like Dre found the right protege (who thankfully wasn’t Bishop Lamont) to inspire (read: write lyrics for) that third LP, like Snoop Dogg and Eminem did with The Chronic and Chronic 2001, respectively. Unfortunately, all Dre and Lamar were able to come up with was a headphones commercial.

Technically, Detox has been permanently scrapped, but Dre could’ve fooled me with Compton, which he says is his final album. As if he needed more to add to his argument after both Chronics, Dre continues to prove that he is the greatest producer of all time, now at age 50 and 30 years into his rap career.

Of course the beats knock, but all of the unfinished leaks that came from previous Detox sessions (and looking at Dre’s recent production discography) made even the most devout West Coast rap fan skeptical.

Even when Compton’s instrumentals go over the deep end with too much electric guitar or bebop, the drums never stopped boxing my internal organs. I’m sure there will be plenty of advertisements tying in the album with Beats By Dre headphones, but this is an album that needs speakers to breathe. It needs to rattle the fine china in kitchen hutches and vibrate rearview mirrors. The descending bassline on “Genocide” feels like it slows my heart beat. “Just Another Day” has only three drum strikes looped, and they might as well render all other percussion meaningless. The album is funky as hell, but there’s also some left-turn rock. All of it works.

Compton might be the first Dr. Dre album with perspective. The Chronic contained a lot of visceral anger surrounding the 1992 Los Angeles riots, and 2001 was mostly an orgy when car bombs weren’t going off. This album begins with a newsreel detailing the history of Compton, California, about the origins of it as a black city, the white flight, and its disenfranchisement that led to a notorious rise in crime. Dre has fully accepted his role as the old head, looking back at his city and his life from the top, extolling the virtues of hard work and health. On “Issues,” he gets philosophical comparing the chalk schoolgirls play with to the chalk police use to outline dead bodies. “It gets the hardest when I think about the dearly departed/Like the n***a I started with/I know Eazy can see me now looking down through the clouds/And regardless I know my n***a still proud,” Dre raps on the closing track “Talking to My Diary,” one of a few references on the album to Eazy-E, the ex-N.W.A. member with whom Dre was feuding with at the time of his death in 1995.

All that said, Compton isn’t completely grown up–there is an Eminem verse after all. At the end of “Loose Cannons” is a troubling skit that shoots and buries a woman. But the younger guests on the album have a certain sophistication that Kurupt and Daz Dillinger lacked on Dre’s previous LPs, and the older artists here seem to have lost a step with their libido. There is no “Pause 4 Porno”-level filth, but there is “Satisfiction,” which is a portmanteau highlighting how other rappers lie about how great their life is–something a 50-year-old who just sold a multi-billion-dollar company should maybe be above caring about.

“Satisfiction” does slap though, even with an overwrought Marsha Ambrosius hook. In fact, none of the 33 guests do anything to take away from Dre’s beats. They also don’t do much to add to them, however, which might be the biggest problem with the album. All of the new artists Dre put on do little to make an impact (and even Dre’s voice is noticeably different, occasionally getting lost in the mix), save for Anderson Paak, who earns his four guest spots.

Luckily, Dre’s longtime collaborators stick out like sore middle fingers. Cold 187um, of the legendary g-funk group Above the Law, and Xzibit combine to sound like the fathers of Kendrick Lamar’s Black Hippy group. Snoop Dogg sounds exhausted from being a lion and a lounge singer, but Ice Cube gives his best verse since since 2004’s “Grand Finale.” Eminem says a lot of goofy stuff fast that will surely impress a certain flavor of rap fan, and even The Game demonstrates what made people like him in the first place. Kendrick shows up three times to remind everyone why he was the main reason rap fans were interested in Detox during this decade. Lamar lives in these tracks, inhabiting every inch of Dre’s beats.

Detox grew its mythos because it was hyped over and over as Dr. Dre reinventing the wheel—that it would be the greatest thing anyone’s ever heard. This inanity might have been best exemplified with “Syllables,” which leaked in 2011 but was supposedly recorded in 2007. It features Eminem, Jay Z, and 50 Cent, and tried to position itself against popular hip-hop at the time. It’s a parody of a popular song that still attempted to succeed by the standards of the songs it parodied. Compton is much more modest.

Dr. Dre announced that he would be using the profits from Compton to “help fund a new performing arts and entertainment facility for the kids of Compton.” Dre didn’t need to build his Xanadu, he just needed to fix up the bungalow in his old neighborhood.