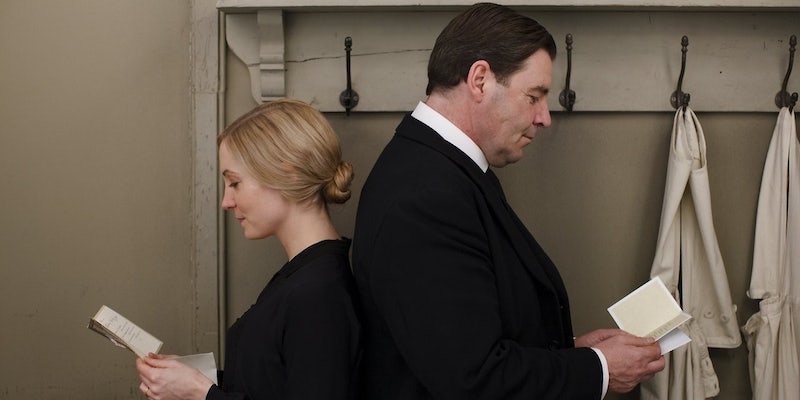 Bad things do happen in Downton. But nobody was expecting the violent rape scene that took place in this week’s episode.

When you get right down to it, Downton Abbey is a soap opera. Sure, it’s a high-budget soap opera that stars Dame Maggie Smith, but in the end the audience is tuning in for a combination of will-they-or-won’t-they romance cliffhangers, and schadenfreude when the villains get their comeuppance.

Of course, bad things do happen in Downton. But nobody was expecting the violent rape scene that took place in this week’s episode.

While Downton Abbey has tackled violent subject matter in the past (an obvious example being World War I), many fans are drawing the line at this particular scene. Not just because rape is an unpleasant topic, but because it seems to have been introduced for all the wrong reasons.

@DowntonAbbey Unnecessary turn of events, warning was insufficient. Using rape to spice up a storyline is cheap. Switching off next week!

Like most soap operas, Downton Abbey doesn’t allow its characters to stay happy for too long. Lady’s maid, Anna, and her husband, Bates, are one such example. After surviving murder charges, a prison sentence, and various other obstacles, it finally seemed like they were going to be happy together… but as TV law dictates, happy marriages reach a boredom episode after three or four episodes. And so, a situation was engineered so Anna could be raped by a new character while everyone else was in another part of the house, listening to loud music so they couldn’t hear her screams.

Rather than being a sensitive portrayal of a serious topic, Downton fans are interpreting this as nothing more than a callous attempt to liven up the Anna/Bates relationship saga.

@HardcoreDoodlin I can’t support Julian Fellowes in depicting rape in a show that treats missing tuxedo shirts as a major crisis.

Many viewers are already pointing out that despite a violence warning at the start of the episode, a traumatic rape scene is very out of character for Downton. This is a show that recently fabricated conflict over whether or not it’s appropriate for a servant to use an electric toaster. In fact, Downton is usually so comfortingly nonviolent that plenty of people didn’t take the violence warning seriously:

Crumbs! A “violence” warning before “Downton Abbey”! Will Maggie Smith drop her fan?

I’m going to assume that the violence warning before Downton Abbey is because Violet finally guns everyone down because of their mediocrity.

Downton Abbey warning: contains violence (beyond what Fellowes normally does to the script).

To give things a bit of context, this season’s main ongoing storyline is all about inheritance tax. In the latest episode, an entire scene was dedicated to one of the servants dropping a jar of jam. So for all that Downton enjoys its melodrama, they’re not exactly pushing the envelope of controversial content.

Right now, most of the blame is falling on the shoulders of the showrunner and lead writer, Julian Fellowes. While the first couple of seasons were popular and critically acclaimed, many fans are losing faith in his abilities—particularly in Tumblr fandom, where people are reminded of past betrayals by showrunners like Stephen Moffat:

“If the plotline for this is Bates ‘fixing’ or ‘saving’ Anna, I will kill someone,” wrote user madameoliver. “And that someone will be Julian Fellowes.” Another user, purple-empire, wrote, “Julian Fellowes… I regard you as a POS who uses rape as a plot device when you ‘run out’ of all the other ‘ideas’ you’ve used for ‘character development’ for women thus far.” And thedarkdaysaregone put it more succintly: “LEAVE MR. FELLOWES ALONE TO DIE.”

If these responses are anything to go by, this episode may have been the last straw.