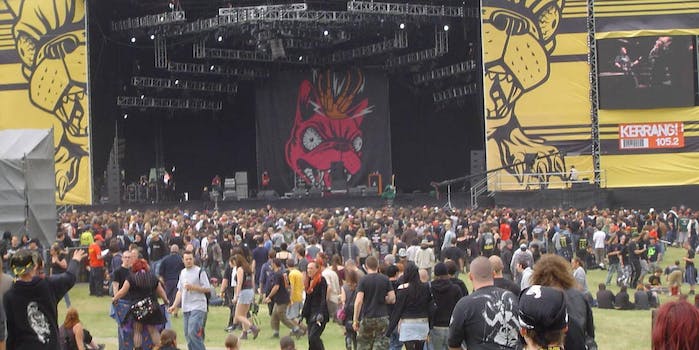 The U.K.'s facial recognition database is thought to include more than 18 million people.

If you attended Download Festival in England this weekend, the police likely scanned your face in order to compare it with a database of known criminals. And no, you don’t get any say in the matter.

Some 90,000 festival attendees had their faces scanned by “strategically placed” cameras using NeoFace facial recognition technology. According to Leicester police, this surveillance technique will help them catch criminals at the festival. It also means 90,000 people just paid to have their faces added to a police database while partying along with their favorite bands.

Some people are already pointing out the irony of Muse playing at a festival with such intense police surveillance. The band’s latest album, Drones, has a political message that, while characteristically ambiguous, would definitely not agree with this kind of surveillance tactic.

@muse #drones comes out this week and the police use facial recognition technology in your first UK gig afterwards… http://t.co/NzhhldniXN

U.K. police forces have been testing this technology since April 2014, but this is the first time it was used at a mass public event. Once collected, the photos of festival attendees will be compared to images from a European database of custody photographs.

The U.K.’s own facial recognition database is thought to include more than 18 million people.

Luckily, a music festival is probably the only place where you can get away with wearing makeup and hair styles designed to trick facial recognition software. These act as a kind of cyberpunk dazzle camouflage, and can often look pretty cool, too.