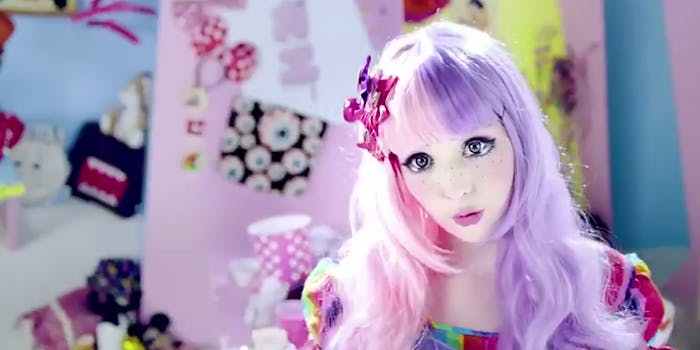 From the Department of Stuff We Can’t Stop Watching.

From the Department of Stuff We Can’t Stop Watching: Doprah is a duo from New Zealand who make gauzy bedroom electro-pop with lots of dark corners and rough edges, in the vein of Portishead, the xx or their fellow Kiwi, Lorde. They’ve already released a couple of intriguing music videos from their self-titled debut EP, but nothing could have prepared us for their latest clip, “Stranger People.”

In the video, Doprah singer Indira Force transforms into an anime-inspired J-pop princess, prancing around an adorable dollhouse set in a brightly colored babydoll dress. As the video progresses, her outfit becomes ever more cartoonish, all at the behest of a giant male hand (played by her Doprah bandmate, Steven Marr) that sometimes pats her on the head to reward a particularly cute dance move, but more often expresses its displeasure by literally slapping her with more makeup.

On one level, the video plays out as a simple homage to the neon-bright J-pop videos of artists like Kyary Pamyu Pamyu. But as Force’s character becomes ever more artificial and puppet-like, it’s also possible to read “Stranger People” as a critique of Japanese kawaii and anime culture and the people who consume it.

Maybe that’s reading “Stranger People” too literally. Maybe Force and Marr are just using the exaggerated imagery of Japanese pop videos to make a broader statement about how all women in pop music tend to be hypersexualized, or infantilized, or both, by what is still a male-dominated industry.

Or maybe it’s best not to worry about any of this and just watch the video again. Force looks so cute in that lavender wig!

Here, for comparison purposes, is one of Kyary Pamyu Pamyu’s most famous videos, “PonPonPon.” Are Doprah satirizing this stuff or celebrating it? We’re still not sure—and maybe that’s the whole point.