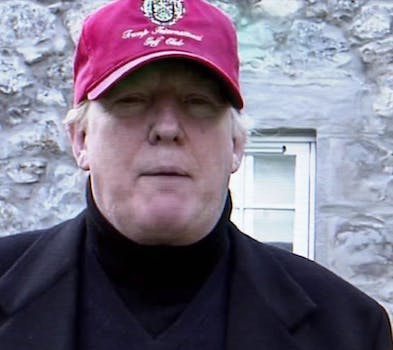 You’ve Been Trumped is not just a documentary about the hotel mogul's attempt to build golf courses in Scotland. It's what happened to director Anthony Baxter.

On the eve of the premiere of You’ve Been Trumped, a documentary that follows Trumps’ efforts to build golf courses on the northeast coast of Scotland, the hotel mogul has taken time out of his normal Twitter routine of promoting his TV show The Apprentice and hyping the Republican party to blast Baxter and his film.

“Your documentary died many deaths. You have, in my opinion, zero talent,” Trump tweeted Tuesday to his 1.5 million followers. “Thanks for helping promote & make Trump International Golf Links Scotland so successful–you stupid fool!”

Baxter’s film follows Trump as he works with the Scottish government to develop hundreds of acres on the coast of Aberdeen, Scotland into two golf courses, a 450-room hotel, and 1,500 luxury homes. Residents of the Aberdeen argue that Trump’s golf course will destroy the natural beauty of the land. Trump contends that his businesses will boost the Scottish economy and create jobs.

“It’s going to be done environmentally perfect,” Trump says in the trailer for the film. “The greatest thing I’ve ever done for the environment is what I’ll be doing here in Aberdeen.”

While the irony of tweeting Baxter’s Twitter profile (which has a link the films official website) to more than one million people was lost on Trump, other Twitter users picked up on the hilarity and helped the film get mentioned more than 200 times in the past 48 hours..

“Congrats @antbaxter on your brilliant film marketing! If you can get @realDonaldTrump to tweet his outrage multiple times, you’re golden!” @JoeKernensHair tweeted.

Trump currently owns 33 different properties around the world, including casinos in Atlantic City, a skyscraper in Chicago, and at least seven different golf courses. Despite his claims of being a savvy businessman and billionaire, many of his business, including the Taj Majal Casino in Atlantic City, have declared bankruptcy on more than one occasion.