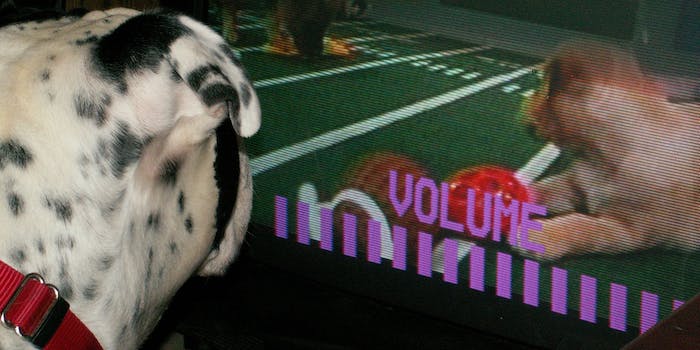 Who are you roofing for?

We know millions of people are watching Animal Planet’s Puppy Bowl X today, but from the looks of posts on social media, their furry friends aren’t being left out.

It seems dogs love the Puppy Bowl as much as people do. And why not? What’s a game involving spandex-clad humans to what must be the canine equivalent of chew-toy errotica? That, or these pooches just can’t stop wondering how those puppies got into the television—and why they can’t be destroyed.

Here’s a sampling of the game day fun:

He was jumping at the television, so I grabbed a chair from my dining room. So intrigued. #PuppyBowl pic.twitter.com/A12msoEWGd

My Puggle has a love/hate relationship with the #PuppyBowl She thinks she has to protect the home from these invaders pic.twitter.com/VtijWg1G67

I can’t decide if it’s pure torture or delight to watch the #PuppyBowl with Lennox. pic.twitter.com/sdK4Ypulnn

She’s cheering on her friends on the #PUPPYBOWL ❤️🐶 pic.twitter.com/qSMMYzOzGw

Even cats got in on the action, though I suspect she was just waiting for the kitty halftime show with celebrity guests Keyboard Cat and Lil Bub.