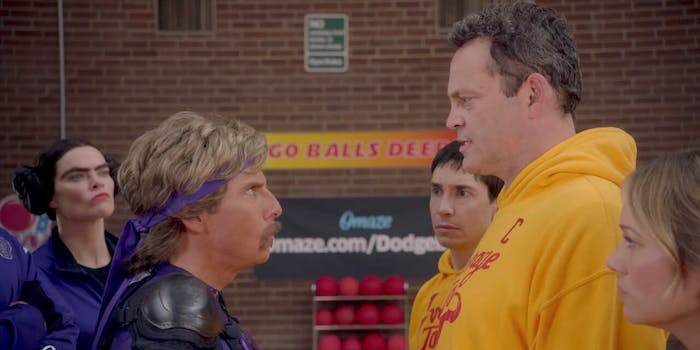 This time it's for charity.

It’s been nearly 13 years to the day since we first saw the Average Joe’s defeat the dominating Globo Gym in DodgeBall: A True Underdog Story, and now they’re finally ready to have a rematch. This time, it’s for charity.

White Goodman (Ben Stiller) and Peter LaFleur (Vince Vaughn) are offering one lucky winner the chance to play dodgeball with them in an Omaze campaign that will raise money for the Stiller Foundation. The winner will get to choose which team they’ll join, get a custom jersey, and learn how to throw wrenches and dodgeballs while blindfolded. Win or lose, you’ll still get pizza with Stiller afterwards.

In the campaign video, which basically functions as a DodgeBall sequel, Goodman and LaFleur are both flanked by supporting members of their respective dodgeball teams. They haven’t changed a bit and are just as bad at dodging wrenches as before. And although the video leans on nostalgia, it never outstays its welcome.

Stiller’s Omaze campaign is also offering limited edition and signed items from the movie in exchange for chances to win.

But it’s only half the battle. The cast of DodgeBall came to raise money for charity and talk smack, and well, they’re already talked smack.