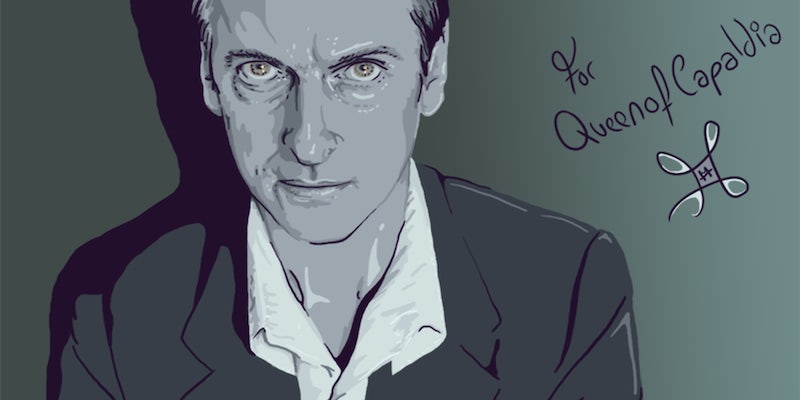 The unsurprising choice for the Twelfth Doctor

The Twelfth Doctor is in. It's not Helen Mirren, Chiwetel Ejiofor, or any of the prestigious names being bandied about.

After months—even years—of speculation, the wait of millions of fans is finally over. The Twelfth Doctor is in.

It’s not Helen Mirren, Chiwetel Ejiofor, or any of the prestigious names being bandied about in the buildup to today’s dramatic BBC announcement.

It’s Peter Capaldi, known to Brits as the wiry spin doctor from the hit series The Thick of It, a wry dark satire about British politics based on the Blair government. The 55-year-old actor is a complete reversal in many ways from Matt Smith, who took on the role of the Eleventh Doctor when he was just 26.

In a live broadcast witnessed by what seemed like everybody on earth, or at least everybody on Twitter and Tumblr, Steven Moffat’s hit show officially braced everyone for the departure of floppy-haired Smith and introduced Capaldi to the world.

There’s no word on how the franchise will get around the fact that Capaldi has already played two other characters during the show’s run, but considering that it routinely defies logic in other respects, it shouldn’t be too hard.

In the days pending the announcement, U.K. bookies said the odds on Capaldi, who had been codenamed “Houdini” prior to the reveal, were so high they’d had to suspend betting on his name. Wikipedia readers were so chuffed for the announcement they briefly updated his Wiki entry with the announcement well in advance.

Prior to the announcement, the entire universe was glued to their TV or social network of choice.

Doctor Who is finally trending in America :)))) its about time ffs

NO MOTHERI AM NOT GOING TO COMPLETE AN M&S SURVAY, DOCTOR WHO IS ON!!!

Earlier in the day it seemed the cat might have been nearly let out of the bag by one lucky photographer—putting paid to the rampant speculation that we were getting a female Doctor:

Just photographed the next Dr Who for tonight’s announcement. Let me know what you think of the photo? He’s going to be an ace Dr.

But while many people had been holding out hope for a nonwhite and/or nonmale doctor, most seemed resigned to their fate. Moffat is notoriously cantankerous about being called out on the lack of representation in his shows, and he stirred up controversy instantly when he mocked the massive campaign for the next Doctor to be a woman.

When he joked that he wanted the Queen to be “played by a man,” the outrage was immediate.

“I’d like to go on record and say it’s time for the Queen to be played by a man.” Fuck you, Moffat, oh my God. #DoctorWho

Geeking out over Peter Capaldi being cast as the 12th Doctor! Excellent choice #doctorwho

There were, of course, some for whom the news wasn’t quite as thrilling.