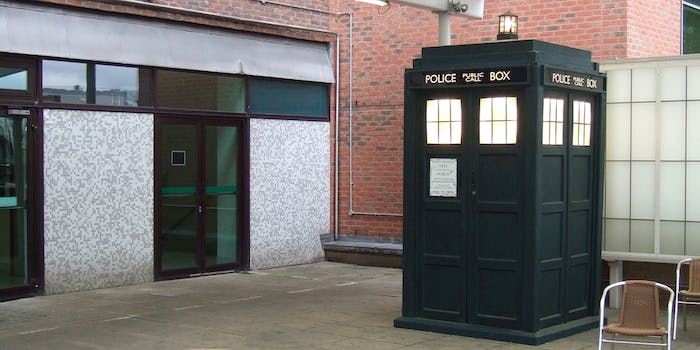 Missing ‘Doctor Who’ on Netflix? Try these 5 shows instead

The dematerialization of Who came with very little warning, but there's hope.

It’s one of the risks inherent with streaming entertainment: You’ll be deep into binge-watching through your latest TV obsession, then bam! Suddenly the show gets yanked out of the catalog with little or no warning. That’s exactly what happened this past week with the disappearance of Doctor Who, long a staple of Netflix Instant, amid rumors of a new BBC streaming service in the works.

Unfortunately, the dematerialization of Who came with very little warning, leaving folks such as my wife—who I’d gotten hardcore hooked on the show over the last month or so—stranded midway through the Doctor’s adventures. While there’s no immediate streaming solution on the horizon, there are alternatives if you don’t want to have to drop a bunch of cash to buy or rent the episodes you haven’t seen yet. While you’re waiting to see where the TARDIS will land next, we’ve compiled a list of several shows that should help ease your pain in a Doctorless world. Just watch ’em fast, because you never know when they might be gone too.

If you enjoy the Doctor’s multiple incarnations, try… Orphan Black

One of the biggest reasons Doctor Who has managed such longevity is thanks to the narrative construct of “regeneration.” When mortally wounded, the Doctor can shift into a new body. It’s still the same man, but with a new face, and with different elements of his personality coming to the forefront. From a real-world standpoint, it’s the same appeal as watching James Bond or Batman or other iconic roles evolve over the years, watching different actors give the same character their own unique flavor. In BBC America’s addictive clone drama Orphan Black, you get that without having to wait years between recastings, and all on the shoulders of one remarkable talent: actress Tatiana Maslany.

Maslany’s Emmy nomination for Outstanding Lead Actress in a Drama series last year was long overdue, because she’s been killing it on this show since 2013. She initially plays Sarah Manning, whose life is thrown into turmoil after watching a woman who looks just like her commit suicide. She soon discovers that both she and the dead woman are clones… and they aren’t the only ones. Over the course of the show, Maslany plays a dozen different clones as the show’s tangled mythology unspools, giving each her own distinct personality and mannerisms, often playing entire scenes against different versions of herself. It’s a master class in acting, and it’ll be great fun for any Who fans who always look forward to seeing what the next Doctor will have to offer.

The first two seasons of Orphan Black are available for streaming on Amazon Prime. The show will return for a fourth season on BBC America this April.

Traveling through time can get complicated, especially without any Gallifreyan bureaucracy to keep the paradoxes from cluttering up the time-space continuum. And speaking of continuums, the convolutions and dangers inherent in time travel are at the core of the Canadian sci-fi drama Continuum. Rachel Nichols stars as Kiera Cameron, a cop from a dystopian, corporate-controlled 2077 Vancouver. Through a series of unfortunate events, she winds up thrown into the past—of 2012—in pursuit of several escaped prisoners who are either terrorists or freedom fighters, depending on your point of view. Trapped in our own present recent past, Kiera poses as a modern cop, trying to track down the fugitives and find a way back to her home era with the help of a young computer genius destined for mighty things.

After an interesting setup, Continuum’s first season soon lost my interest, hewing a bit too predictably to standard “sci-fi procedural” templates. Thankfully, others I trust stuck with it after I bailed, and their continued insistence finally forced me to give the show another chance. What I found was a show that delved into the nature and implications of time travel in all sorts of fascinating ways, from alternate timelines to causality loops and chicken-egg paradoxes. You may need a flowchart to keep up, but that’s half the fun.

All four seasons of Continuum are available for streaming on Netflix Instant.

If you love the Doctor being the smartest guy in the room, try… Sherlock

Part of the fun of Doctor Who is watching the Doctor continually outsmart and outmaneuver his many, many enemies. In a pop-culture landscape where victory is often achieved through violence, the Doctor gets out of nearly every conundrum through the judicious application of his mind. Sherlock Holmes is an obvious inspiration for many aspects of the Doctor, so it’s unsurprising that current Who showrunner Steven Moffat’s other most noteworthy pop-culture contribution—co-created with fellow Who writer Mark Gatiss—is a modern spin on Sir Arthur Conan Doyle’s legendary consulting detective.

Benedict Cumberbatch plays the brusque but brilliant Holmes opposite Martin Freeman (The Hobbit) as Dr. John Watson. As in most incarnations of Doyle’s stories, the interplay between Holmes and Watson is as much an attraction as the actual mysteries, but it’s also fascinating watching Holmes operate in a modern landscape populated by things like smartphones and DNA evidence. Not to be confused with the suspiciously-similar-in-concept-and-timing American series Elementary, Sherlock is full of cracking good dialogue and clever twists, and since each season is structured as three episodes running around an hour and a half each, it’s perfectly suited for treating it like a miniseries and burning through it over the course of a week or so.

The first three seasons of Sherlock are available for streaming on Netflix Instant. The recently aired holiday special Sherlock Holmes: The Abominable Bride hasn’t made the leap to Netflix yet, but you can purchase or rent it on Amazon.

If you want a universe as wild and wonderful and crazy and as Who’s, try… Farscape

The Who-niverse has given us a magic box that’s bigger on the inside and murderous stone angels who only move when you aren’t looking at them, but it also gave us screaming genocidal alien peppermills with plungers on their faces. You literally never know what the Doctor will encounter next on this show, because Doctor Who’s expansive imagination is matched only by its fearlessness in being just as goofy as it can be dark or heartbreaking. The wild swings in tone and style can be jarring at times, but that’s all part of the fun. The gone-but-not-forgotten Sci-Fi Channel series Farscape is the best other example I can think of when it comes to mixing the silly with the somber, resulting in something wholly unlike 99 percent of the shows that ever make it to screen.

The criminally underemployed Ben Browder stars as John Crichton, a modern American astronaut sucked through a wormhole and dropped into the “Uncharted Territories,” a wild corner of the galaxy populated by all manner of fantastic alien civilizations. He soon finds himself partnered up with a crew of escaped convicts aboard a living starship called Moya, on the run from one of the most dangerous military forces in the Territories… and that’s just in the first episode. Produced by Jim Henson Productions, Farscape is like the cantina scene from Star Wars writ large and filled with Muppets, chockablock with amazing creatures and colorful worlds that make Star Trek’s recurring forehead prosthetics seem a bit quaint. It’s thrilling, it’s funny, it’s often batshit bonkers (in a good way), and it features one of the best screen romances I’ve ever seen, thanks to blistering onscreen chemistry between Browder and Australian actress Claudia Black. It’s the closest thing we’ve ever had to the weird and wonderful Who here in the States, and it demands your bingeing attention immediately if you haven’t already seen it.

All four seasons of Farscape are available on Netflix Instant. The first two seasons are also currently available on Hulu.

If you love the Doctor’s mix of whimsy and emotional scar tissue, try… Fringe

The Doctor is one of the most dangerous forces in the galaxy, renowned and feared by names such as “The Oncoming Storm.” He’s also a frenetic lunatic who regularly faces down the most vile menaces the universe has to offer, armed only with his wits and a sonic screwdriver. He is also an incredibly lonely nigh immortal who never lets himself stay in one place long enough for the centuries’ worth of lost friends and regretted decisions to pile atop him. For all his charm and eccentricity, the Doctor has done some very bad things, often at the expense of those who trusted him most. But he means well.

In Fringe, we meet Dr. Walter Bishop (John Noble), a literal mad scientist and expert in “fringe science” who has spent years institutionalized after a lab accident killed one of his assistants. He’s genial, he’s absent-minded, he’s easily distracted—he’s like your favorite grandpa, a once brilliant man brought low by dementia. The show gradually reveals, however, just how many terrible things Walter did along the road that led him into that institution, choices that put quite literally the entire universe at risk. As with the Doctor, he meant well. But as with the Doctor, the consequences of that road to hell will take a terrible toll on those Walter cares for the most.

Fringe is many things—a passable X-Files clone that evolves into much more, a cavalcade of grotesqueries and skin-crawling moments, a reminder of why Star Trek’s “Mirror, Mirror” was so much fun—but none of that would be worth a damn without the flawed, complex, tragic figure at its heart.

All five seasons of Fringe are currently available on both Netflix Instant and Amazon Prime.

Photo via Ben Sutherland/Flickr (CC BY 2.0)