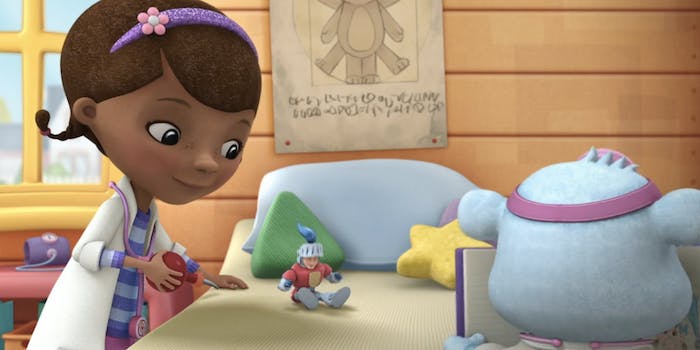 The Disney show starring a young Black doctor hasn't been renewed for a fifth season yet.

The fate of Doc McStuffins, a popular Disney Junior television show, remains unknown, and fans are rallying to tell execs to renew the network’s only cartoon with a black female in a starring role.

When Dottie “Doc” McStuffins wears a stethoscope, her toys come alive, and she cares for them in her home clinic. The show debuted in 2012, and if renewed, will be entering its fifth season.

Fans of Doc McStuffins are championing the show, hoping Disney will renew the program, giving children of color the opportunity to be reflected in a protagonist. Using the hashtag #RenewDocMcStuffins, fans are sharing stories about the importance of the TV show.

Doc lets little Black girls be centered in a cartoon world where we usually do not even exist! #RenewDocMcStuffins pic.twitter.com/GyEpnwEl9O

#RenewDocMcStuffins because having a black female main character who is a doctor is powerful #RepresentationMatters pic.twitter.com/RkOTOYKUD5

It’s a wildly popular television show that net $500 million in sales last year, and, as the New York Times reports, she has had a “crossover” appeal and blockbuster success. “The kids who are of color see her as an African-American girl, and that’s really big for them,” said Chris Nee, the show’s creator, told the publication. “And I think a lot of other kids don’t see her color, and that’s wonderful as well.”

People of color are significantly underrepresented in media, especially in television that focuses on science and technology. In a piece for the Atlantic critiquing the entertainment industry’s failures at diversity, Olga Khazan writes, “African-American, Hispanic, Asian, and disabled actors have been struggling to achieve proportional and fair representation on TV since the age of Andy Griffith.”

Numerous studies show the dearth of diversity and representation in media. According to the Atlantic:

[A] study in 2010 (14 years after Pete & Pete went off the air) found that black and Latino characters were still underrepresented on primetime TV, and “black and Latino characters were significantly more likely to be shown as being less intelligent compared to whites.” A UCLA analysis of 172 American movies and 1,000 TV shows on 68 different networks during the 2011-2012 season found that minorities had lead roles in just under 11 percent of films, and just under 15 percent of cable comedies and dramas. Meanwhile, minorities accounted for 36 percent of the U.S. population that year.

It’s not just television where main characters are always white. A 2012 analysis reviewed 3,600 children’s books, and found just 3 percent were about African-Americans, two percent featured Asian and Pacific Americans, Latinos were featured less than two percent of the time, and American Indians less than one percent, the Washington Post reports.

Disney has not announced whether it plans to cancel or renew the show, but fans everywhere are hoping the young girl that brings stuffed animals to life will get an extension on her own.