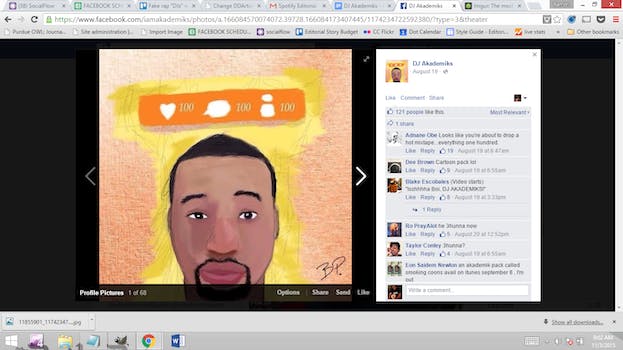 DJ Akademiks is one of the most popular online figures in rap music. Not because of any music production or actual DJ work, but rather his knack for reporting gossip.

Tech-savvy, young hip-hop fans routinely come to him for rumors and viral offerings, whether it be Young Thug following Caitlyn Jenner on Instagram or Suge Knight fainting in a courtroom (the most-viewed video he has made). DJ Akademiks is molding urban news in his image one screenshot, one added watermark, at a time.

The guy has amassed more than 125,000 Twitter followers, 90,000-plus Instagram followers, hundreds of thousands of subscribers to his various YouTube channels, and he’s recently taken on livestreaming platform Twitch. There is no host blog, but rather a series of attacking outlets that flock to where his audience converses.

He did begin as a DJ though.

Akademiks was a literal disc jockey at the Rutgers University radio station every Saturday from 6:00pm to 8:00pm ET until 2013. Originally from Spanish Town, Jamaica, Akademiks emigrated to the United States in high school, he says, around 2001. (He declined to tell the Daily Dot his real name.)

He was shy as a foreign teenager and besides a couple of Jamaican friends, he clung to music—specifically hip-hop. He integrated himself to the culture through early rap blogs and forums, and by the time he went to college, he became comfortable enough to open himself up online.

“In college, I’m like, ‘You know what, I think I’ve grown into what I now believe is me,’” Akademiks tells the Daily Dot on the phone.

Akademiks says he received his bachelor’s degree in biomathematics, and it was in school where he started DJing parties and barbecues. He would play events and then post footage to YouTube and Facebook, some of these clips are still posted. When strangers started coming across the videos and requesting him to do parties outside of his immediate area, Akademiks realized how powerful his Web impact was becoming.

Akademiks was a regular at online hip-hop forums, and began to feel comfortable enough to post about Kanye West albums and Chris Brown arrests, right alongside party videos and a DIY strain of his interviews. But he also began to report deeply embedded info that became increasingly exclusive. He likened it less to carving out a journalistic niche than putting forward a brand that is passionate enough about rap to pay attention to its gossip and minutiae. Over time Akademiks found what people responded to most, and he catered to it.

His information arrives largely via fan tips. He says tipsters go to him before aggregating blogs like WorldStarHipHop or a gossip site like TMZ—though at this point, it’s hard to tell those outlets apart from Akademiks in terms of their reporting pace.

He claims to have received “at least 600 videos” of an incident that caused 61 people to be arrested during this year’s Summer Jam music festival in New Jersey, for instance. As far as fact-checking goes, Akademiks says he tries to reach out to the person his story is about, but also conceded that most of the time, they will not give confirmation.

But lest you think he’s not giving careful consideration to work, his coverage has a three-point plan for ethics and best practices:

“Number one, does my audience care about this? Number two, for the discussion we are going to have, is this relevant? Number three, are these all the facts that are important to the case for us to even have a discussion in the first place?” he says.

What’s relevant is subjective, he adds. But rather than chasing what’s trending nationwide, he simply follows his followers. He sees himself in them. He can elaborate: “My type of people who will think like me, listen to music like me, and most likely act and react like me. And not only that, but what’s relevant to me is relevant to them.”

He cops to actively reading comments, especially when he doesn’t agree with this audience. He mentions doing a story on Caitlyn Jenner.

“I feel like this could be the media moment of the week,” he remembers, and he was certainly right about Jenner on a national level. But his often insular, hypermasculine community of rap heads tuned it out: “There’s no conversation I want to have about it, it’s not something we’re interested in,” is what came back.

Most of what DJ Akademiks is doing–reporting on gossip and posting his assessment of it online–is not unique. (In fact, the name “DJ Akademiks” has been used by an on-air radio personality in Baltimore for at least the last seven years.) Websites like Media Take Out and Bossip have thrived focusing on black celebrities often ignored by traditional gossip magazines, and personalities like DJ Vlad and Charlamagne tha God have built their brands as pot-stirring commentators.

Akademiks doesn’t quite create beefs like Vlad or Charlamagne, but he does tend to prop up obnoxious, widely held beliefs. Take, for example, his videos entitled “Michael Sam Has a Terrible Performance at NFL Combine. Is the Gay Agenda Pushing Him?” or “Lupita N’yongo Beauty, Skin Color & The Black Agenda.”

These could be interpreted as equal parts conspiracy theory and trolling, but he knows what gets people engaged. Sometimes that can be not sharing his opinion, and it always means controversial worldviews.

Akademiks’s social-media popularity is somewhat divorced from his YouTube videos. The two former platforms of his are almost uniformly made up of memes and news with little commentary. He wants to eventually “completely separate” his “personal brand” and his “media brand.”

At the moment those two aren’t far apart, especially with his YouTube videos embellished with the kind of tired jokes a Twitter comedian might not even use at this point, like sexist references to “thots” or Jerry Sandusky. He is prone to that troll-esque, removed sarcasm that’s so prominent among those who process and judge complex issues from behind a computer screen.

DJ Akademiks has a whole channel dedicated to the “War in Chiraq,” a popularized term for the widespread youth violence in Chicago. The channel details the incarcerations, murders, and occasionally, the music of Chicago rappers.

When I ask if his videos trivialize Chicago violence by employing the same comedic tone he uses elsewhere, he says no. He says there is a “cool factor” with Chicago rap and that, “You have to let people know that this is not even cool. This is ridiculous… You have to point out or use satire, and that’s exactly what I’ve done.”

He continues: “Most of my followers think [the violence] is cool… My videos serve a purpose to let people know that no I don’t [think it’s cool].” It is unclear how comparing an opposing gang coming to the home of a 20-year-old to murder him with a pizza delivery (“The goddamn opps is doing goddamn deliveries. This is like Papa John’s”) accomplishes that goal.

I ask DJ Akademiks about the gay jokes he makes in reference to the heterosexual Atlanta rapper and colorful dresser Young Thug. “Young Thug is a new representation of the confusion and the market factor that he’s used,” he says.

As best as I can interpret, Akademiks is getting at a similar thing that rapper Wale said during a recent interview about how being gay can help an artist’s music career, while specifying that it is the questions surrounding Young Thug’s sexuality–and not explicit homosexuality–that draws interest. He dismisses Young Thug’s persona as “just marketing.” Akademiks says it is his job to “point it out and make it white and black,” rather than the “gray” and “vague” ways on which Thug presents himself.

Regardless of what problems people may have with DJ Akademiks, both his reporting and commentating styles are set to become even more pervasive. The previously mentioned Charlamagne tha God, whom Akademiks considers a “mentor,” has expanded his brand from radio and social media to podcasting and various television shows.

DJ Akademiks gets better at aggregating content with each tweet and video, continually figuring out how to expand and build his audience. He’s already at the numerical level of opportunistic social media personalities DJ Zeeti and 40oz Van.

Last month the website created and run by Dr. Henry Louis Gates, the Root, used a DJ Akademiks tweet in a news story about Drake and Meek Mill. It was one of the first times a website has sourced Akademiks that wasn’t a rap blog. Unless someone else can repost and add their watermark sooner than he can, it won’t be the last.