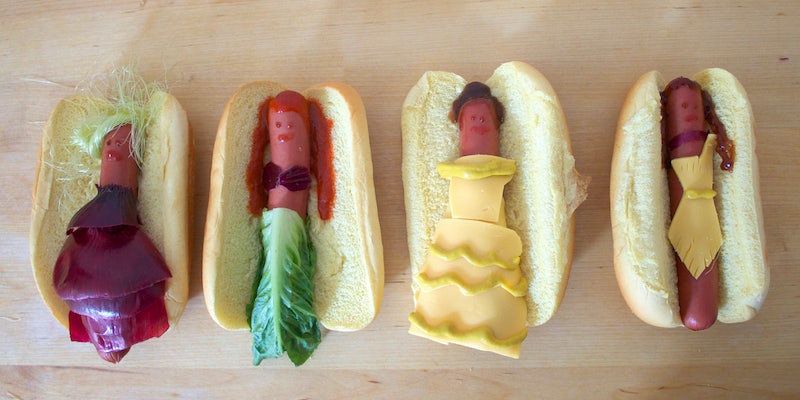 How those Disney Princess Hot Dogs became exactly what they mocked

In their Deranged Crafts column over at Lucky Peach, Anna Hezel and Gabriella Paiella teach the world how to make something disturbing-but-edible once a month. The recipes all adhere to the food blog convention of combining high-res photography with a cutesy theme that’s been dialed up slightly farther than you’d care for—and are supremely funny.

In the past, they’ve taught us how to make party favorites like the Spa Lady Cheese Ball and a hamburger wedding cake, much to Twitter‘s enjoyment. But their October creation, “Disney Princesses Reimagined as Hot Dogs,” went viral in a whole new way.

The premise was elegant and simple: They took four hot dogs, four buns, and some accessories, and assembled them in homage to the Internet’s Disney Princess fatigue.

At last, everything you love about Disney princesses in hot dog form. https://t.co/VzhyzudULQ pic.twitter.com/OO4i8Y9dN3

At first, New York media Twitter was laughing and sharing the pics the way they do every month. But then something weird happened: The recipe Hezel and Paiella made to poke fun at how exhausting it is to watch the Internet compulsively reimagine the Disney Princesses became a hit with a lot of Disney Princess fans. And hot dog fans. And people who just love silly, simple crafts.

The princesses quickly spread across the content wastelands, catching the attention of people like the Fat Jew, who first posted Ariel without credit but later updated by tagging Lucky Peach. The dishes also caught the art world’s attention; people like designer Todd Oldham have regrammed. Just this Thursday, the princesses were shouted out on ABC’s daytime food and lifestyle show The Chew.

If you search #hotdogprincess or #disneyprincesshotdogs on pretty much any platform, you’ll find someone who saw the pic and recreated it at home.

The Daily Dot emailed the ladies to talk about what happens when your joke about a meme gets absorbed by the meme itself.

Daily Dot: What is the hot dog Disney Princess origin story? Walk me through your inspo.

Anna Hezel: At some point, we were on a real kick with meat crafts, and Gabriella just turned to me with a sparkle in her eye and whispered, “Anna, what if we reimagined Disney Princesses as hot dogs?”

Gabriella Paiella: Yeah, I think I tweeted it as a joke months ago and then I realized “wait, I’m the master of my own destiny” and here we are. Also we happen to have a platform that pays us to make disgusting things out of gross meat products, so we are very #blessed to have that support.

Why hot dogs? Why Disney Princesses?

AH: I would say that we’ve always found hot dogs to be really inspiring to our work. Even though Gabriella is a vegan and I’m not, we both kind of agree that meat is really gross, and there’s a lot of space for humor and beauty in that grossness. Disney Princesses are just a blank canvas for a lot of people to project their nostalgia and anxieties onto. They’ve sort of turned into this bottomless fount of Internet content, and we wanted to make fun of that.

GP: The endless iterations of Disney Princesses were just begging to be made fun of.  And there’s something so inherently grotesque about a hot dog that made the juxtaposition of these fanciful, beautiful characters with a tube of meat extra powerful.

What was making them like? How long did it take?

GP: And another minute feeding them to my dog, who ate them whole.

What did you think the reaction to the piece would be? Was that even a consideration?

AH: Most of the work we do for Lucky Peach is very disturbing and very deranged, but I think we kind of knew (or at least hoped) that incorporating a lot of people’s favorite childhood movie characters would take things up a notch.

GP: Our pieces tend to be inside jokes that we hope to share with a broader audience. I think that the reaction to these was expected because they came out at a time when Disney princess iterations are super clickable and popular—and there was a lot of fatigue over that. It appealed to people who just took the reimagining at face value as something cute, and it appealed to people who wanted to make fun of them.

Walk me through the tiers of reaction that ended up happening. I feel like it was such a solid case study in meme digestion, and the further it got away from you guys, the more it seemed to become the thing you’d been poking fun at in the first place.

AH: At first, places like Cosmo and MTV and Paste started re-posting our pictures with really funny, self-aware commentary. Paste’s headline was “Good Night to Reimagined Disney Princesses. They’re Hot Dogs Now.” But then, in a weird halo effect, a lot of other publications started posting about them as just a genuinely good thing to try out with hot dogs, with headlines like “Iconic Disney Princesses Reimagined as Mouth-Watering Snacks.”

GP: Exactly. Some of the Twitter and Facebook reactions immediately wrote it off as another silly reimagining—I remember one guy said that “someone please pity bang the person who thought of this.” If you’re reading this, guy: Fuck you.

Where’s the weirdest place you’ve seen them, or the most surprising person you’ve seen post them?

AH: At some point, an Internet comedian complained about them, and (BoJack Horseman production designer) Lisa Hanawalt reprimanded him, defending the hot dogs as art. Gabriella and I are both huge fans of Lisa Hanawalt and her art, so this was extremely exciting and flattering and unexpected.

GP: Yes, that was huge! We love Lisa! Someone also let me know that Jessie J posted one, and I’m still not really sure who she is, but I do know that she recorded a song with Ariana Grande and Nicki Minaj, so I hope she showed it to them in a group text.